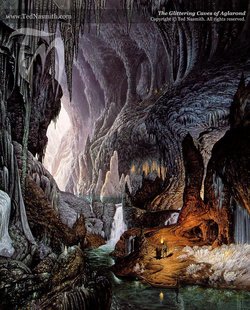 The Glittering Caves of Aglarond by Ted Nasmith.

Aglarond ("Place of Glory") was a name for the Hornburg as well as the Glittering Caves behind it at Helm's Deep.

Aglarond was one of the two fortresses built by Gondor guarding the Fords of Isen, Angrenost (later Isengard) being the other. Like Angrenost to the north it was initially well guarded, but as the population of Calenardhon (the later Rohan) dwindled it was increasinly less supplied and deemed unimportant, until it was only ruled by a hereditary small guard who intermarried much with Dunlendings.

When Cirion, Steward of Gondor, gave Calenardhon to the Éothéod Aglarond was transferred into Rohirrim care, who named it Súthburg (southern burg) in their language. The Gondorian guard was merged with that of Angrenost to the north, which remained in the keep of Gondor. Guard duty of the Fords was initially shared between Gondor and Rohan, but later maintained only by the Rohirrim.

During the reign of Helm Hammerhand, Rohan was attacked from Isengard and across the river Isen by Dunlendings. Edoras was taken, and Helm and much of his people retreated to Súthburg. Because Helm always blew a great horn before riding out to fight the beleaguering Dunlendings, the keep was renamed Hornburg. During the War of the Ring, the Hornburg was the refuge of the Rohirrim as they defended Helm's Deep.

After the war, Gimli the Dwarf, who had fought mightily in that battle, established a colony of Durin's folk there. Aglarond lay in front of a huge and very beautiful cave system, which proved irresistible to him. Gimli became known as 'the Lord of the Glittering Caves', although this new realm was presumably under the overlordship of Thorin III Stonehelm, his kinsman and heir of the lordship of all Durin's folk. The Dwarves of Aglarond restored the Hornburg following the War of the Ring, and it became a shared fortress between them and the Rohirrim.