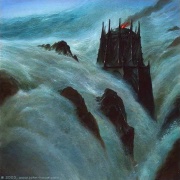 Drowning of Numenor by John Howe

Akallabêth ("The Downfallen" in Adûnaic; Quenya is Atalantë) is the story of the destruction of the Kingdom of Númenor. At the end of the First Age (described in detail in the Quenta Silmarillion), those of Men who had been helping Elves in their fight against Melkor were given a new small continent of their own, free from the evil and sadness of Middle-earth. It was located in the middle of the Great Sea, between the western shores of Middle-earth, and the eastern shores of Aman, where the Valar dwelt.

As they entered Númenor, the Men were forbidden to set sail towards Aman. They gladly agreed to this, because they regarded mortality as a gift, and did not envy the Valar and Elves who could not die. For two and a half thousand years Númenor grew in might. Númenórean ships sailed the seas and established remote colonies, some of them in Middle-earth. During that time, the Elves of Middle-earth were engaged in a bitter fight with Morgoth's former servant Sauron, who had turned into a Dark Lord himself. The Elves asked for the help of the Númenórean, and they agreed. But as time went on, it became evil and rebelled against the Valar and the Elves, over the course of one thousand and a half years, desiring immortality. There was one king, the second-last, who tried to amend the evil, but it was too late. During this time, Númenor still grew more powerful.

The last king wanted control of Middle-earth, and so he attacked Sauron. Sauron's armies became afraid of the might of Númenor, and so he was captured and brought imprisoned to the Númenórean king. However Sauron exploited his power to corrupt the Númenórean king to his will. Soon he became his advisor, and much of Númenor obeyed his will and worshiped Morgoth. Sauron convinced the king to try and assail Aman for immortality, desiring to destroy Númenor with the wrath of the Valar. However as this was done, the Valar appealed to Eru Ilúvatar. Eru destroyed the Númenórean host, by crushing it under stones; however he also caused the whole of Númenor to sink under the Great Sea. Just a few men of Númenórean royal blood, uncorrupted by Sauron who came from a long line called the Faithful, had fled Númenor by ships earlier with some gifts that Men received from the Valar and the Elves in times of peace. They were led by Elendil the Tall, and his two sons: Isildur and Anárion.

They set sail to Middle-earth, where the followers of Elendil established two kingdoms which were managed as Númenórean provinces: Gondor in the south, and Arnor in the North. Some of the King's Men, enemies of Elendil, established other realms in exile to the south; of these the Haven of Umbar was the chief. The culture of Númenor became the dominant culture of Middle-earth (thus, Westron, a descendant of the Adûnaic language of Númenor became the Common Speech). The sadness and the shock from the loss of a whole continent lived ever in the hearts of kings of Númenórean descent. Arda was made spherical, and Aman was put beyond it, out of the reach of mortal men. Sauron, although greatly diminished and bereft of shape, escaped Númenor and return to Middle-earth once more.

The story originated with The Lost Road, an abandoned time-travel novel. The story also forms a major element in The Notion Club Papers, likewise an abandoned time-travel novel. Other versions of the story include various texts called The Fall of Númenor and the version in the "Mannish Tradition," The Drowning of Anadûnê. These texts can be found in HoME Volume IX, Sauron Defeated. A highly abbreviated version of the story is found in Appendix A of The Lord of the Rings.

As the Quenya name makes obvious, this is a retelling of the story of Atlantis in the Middle-earth cadre. Though as Tolkien himself noted, the Root TALAT 'Slope, sliding' occoured in the Elvish languages back to C. 1918, well before the Numenor Legend was invented.