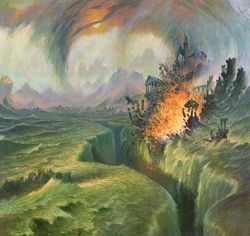 The Akallabêth is the story of the destruction of the realm of Númenor. It tells how the Númenóreans, the descendants of those Men who aided the Elves in their fight against Morgoth during the First Age (described in detail in the Quenta Silmarillion), turned by degrees against the Valar and the Eldar and were ultimately destroyed by Sauron. The Akallabêth was written by Elendil near the end of the Second Age.

At the end of the First Age, the Dúnedain, who alone among the race of Men were loyal defenders of the Elves during their war against Morgoth, were given a new land of their own in reward for their efforts, free from the troubles and sadness of Middle-earth. It was located in the middle of the Great Sea, between the western shores of Middle-earth and the eastern shores of Aman, where the Valar lived.

The Men of Númenor were forbidden by the Valar to sail westward so far that they could no longer see the island—"the Ban of the Valar", as it became known. As a result, the majority of their voyaging was eastward and in time they returned to the shores of Middle-Earth. For two thousand years Númenor grew in bliss. Númenórean ships sailed the seas and established remote colonies in Middle-earth. During that time, the Elves of Middle-earth were engaged in a bitter fight with Morgoth's former servant Sauron, who had turned into a Dark Lord himself. Gil-galad asked for the help of the Númenóreans, and they agreed. King Tar-Minastir sent an army to the aid of the Elves and its timely arrival ensured victory over Sauron.

The Beginning of Discontent

But having tasted the power of conquest and victory in arms, it was only a matter of time before the Númenóreans made settlements of their own in Middle-earth. Many began to speak openly of their envy of the Eldar's immortality and in defiance of the Ban. It appeared to the Valar that the shadow of Morgoth had returned to plague their hearts. Emissaries of the Valar came to Númenor, seeking to remind them that death was not given as a punishment. But the people of Númenor became split between the King's Men—those loyal to the King and prone to oppose the restraints upon Númenor, and the Faithful—those who remained true to their friendship with the Eldar and loyalty to the Valar. As time went on, Númenor continued to grow in wealth and might, yet somehow its people's bliss was diminished.

After the defeat of Sauron halfway through the Second Age he retreated to the security of Barad-dûr as his hatred of Númenor grew. As the Númenóreans established colonies along the shores of Middle-earth Sauron eventually assailed them. By the time of the last King of Númenor, Ar-Pharazôn, Sauron had staked his claim on the title of King of Men. Ar-Phârazôn became angry with Sauron's attacks against his people, and furthermore wanted to claim the title "King of Men" for himself. He came with a great host to the shores of Middle-earth at Umbar and bade Sauron to come before him and bow to the might of the King. Sauron, to the surprise of many, did as he was asked. But the King was not content with his show of obedience, and brought Sauron back to Númenor as a hostage.

The Influence of Sauron

Sauron gave the impression that this was against his will, but in truth it was exactly what he wanted. Sauron exploited his power to corrupt the Númenórean King to his will. Soon he became his advisor, and most of the King's Men obeyed his will and worshipped Morgoth. Sauron convinced the King to assail Aman in order to gain immortality, desiring to destroy Númenor with the wrath of the Valar. However, as this was done, the Valar appealed to Eru Ilúvatar.

The Downfall of Númenor

Eru destroyed the army of Ar-Pharazôn that had landed on Aman by crushing it under stones; however, he also caused the whole of Númenor to sink under the Great Sea. Arda was made spherical at this time, and Aman was put beyond it, out of the reach of mortal Men. Just a few people still uncorrupted by Sauron managed to escape the catastrophe; they fled Númenor by ship, carrying some gifts that the Dúnedain had received from the Valar and the Elves in times of peace. This group of Faithful Númenóreans was led by Elendil the Tall and his two sons, Isildur and Anárion.

They landed in Middle-earth, where the followers of Elendil established two kingdoms which came to be known as as the realms of Exile: Gondor in the south, and Arnor in the north. Some of the King's Men, enemies of Elendil, who were in Middle-earth at the time of the Downfall established other realms in exile to the south; of these the Haven of Umbar was the chief. The culture of Númenor became the dominant culture of Middle-earth (thus, Westron, a descendant of the Adûnaic language of Númenor, became the Common Speech). The sadness and the shock from the loss of their island home always remained in the hearts of Kings of Númenórean descent. And they were dismayed to discover that Sauron, although greatly diminished and bereft of shape, had survived the Downfall and returned to Middle-earth to continue troubling its inhabitants.

"Akallabêth" was also a general name for the island of Númenor after its Downfall. The Exiles became reluctant to speak of the land by any other name, or indeed much at all; but at times "they turned towards the West in the desire of their hearts" and remembered Akallabêth, their former home.

The study of Númenor's history was suppressed in the realms of Exile because it was seen as a vain pursuit, "breeding only useless regret". Only one story from the former home of the Dúnedain remained generally known: the cautionary tale of the pride of Ar-Pharazôn and his "impious armada", which corresponds to the last half of the Akallabêth.

Akallabêth is an Adûnaic word meaning "She that hath Fallen" (from the verb kalab, meaning 'fall down'). The Quenya translation of this word is Atalantë, derived from the verbal stem talat-.

As the Quenya translation of the word makes obvious, the Akallabêth is a retelling of the story of Atlantis in the setting of Arda. Even so, as Tolkien himself noted, the Quenya root TALÁT 'slope, sliding' dated back to c. 1918, well before the legend of Númenor was invented.

The Akallabêth originated with The Lost Road, an abandoned time-travel novel. The Lost Road, and the supporting legends Tolkien devised at the same time (which are the true germ of the Akallabêth itself), was written in the mid-to-late thirties. Tolkien abandoned The Lost Road before writing much of it, but he began to develop the tale of Númenor's Downfall further when writing The Notion Club Papers in the 1940's. At this time he made two traditions concerning Númenor's history, each with its own retelling of the Downfall: The Fall of Númenor, a more Elvish version, and a "Mannish" form, The Drowning of Anadûnê. These texts can be found in Volume IX of The History of Middle-earth, Sauron Defeated.

A highly abbreviated version of the story, as well as a direct allusion to the Akallabêth, is also found in Appendix A of The Lord of the Rings.

Tolkien's final revisions of the Akallabêth were published in the last volume of The History of Middle-earth, The Peoples of Middle-earth. It was from this version that Christopher Tolkien got the document that he published in The Silmarillion. Since the latest version of the Akallabêth contained references to Ælfwine, Christopher Tolkien had to edit it somewhat before attaining a story that would be compatible with Tolkien's later envisioning of the in-universe development of the tradition, in which Ælfwine did not play a role.