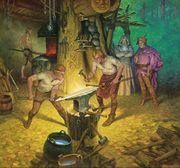 Finally, after three thousand years, when Aragorn set out for the War of the Ring, Narsil was reforged, and Aragorn renamed it "Andúril".

Aragorn often used the sword to help establish his credentials as the heir to the throne of Gondor. This was especially true when he convinced the Dead Men of Dunharrow to fulfill their oath to support Gondor in its time of need.

Because of Aragorn's warrior-persona in this video game, Andúril merely serves as a melee weapon upgrade after Rivendell. [5] Aragorn does not use the broken sword at any point prior. Notably, the sword's blade is constantly illuminated; it glows red during the day, and blue at night. In the game's credits, artist Jason Rosenstock is explicitly mentioned as the designer of Andúril.[6]

In The Two Towers, when asked by Háma to disarm outside Meduseld, Aragorn is very reluctant, saying that normally he would give up his weapon, "if I bore now any sword but Andúril".[7] This scene and dialogue is omitted from the film on the grace that the sword Aragorn surrenders there was not Andúril.

In the extended edition, the Mouth of Sauron refers to the blade as Elvish; this could either be a reference to its reforging or a mistake on behalf of the writers.[8]

The reforging of Narsil is experienced by the player in the quest arc called "The Blade that was Broken". The player sets out to find the last of the Silithair, shining adamants crafted by Elves of the house of Fëanor in days of old, in order for the Elf-smiths of Imladris to reforge the sword into Andúril.[9]