"And it came to pass after many years of journeying in this manner that the Eldar took their course through a forest, and they came to a great river, wider than any they had yet seen; and beyond it were mountains whose sharp horns seemed to pierce the realm of the stars."
― Quenta Silmarillion, "Of the Coming of the Elves and the Captivity of Melkor"

Anduin was the river that crossed most of Middle-earth east of the Misty Mountains. Passing through many lands, it had received many names - Langflood by the ancestors of the Rohirrim, the Great River of Wilderland in the Westron of Rivendell and the Shire, and simply the Great River in Gondor. All these names are in recognition of the river's length.

It flowed from its source in the Grey and Misty Mountains to the Ethir Anduin in the Great Sea (Belegaer). The river had perhaps a total run of 1,388 miles[2] It was always the frontier of the west-lands of Middle-earth.[3]

The Anduin began as two different streams near where the Misty Mountains met the Grey. These were called the Langwell and the Greylin by the Éothéod when they lived in the triangle of land formed by it. Their old capital Framsburg was built at the confluence of these streams where the Anduin proper began. The Langwell had its source in the Misty Mountains, close to Mount Gundabad, and the Greylin began in the westernmost heights of the Grey Mountains. 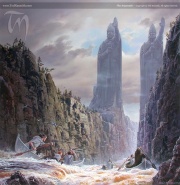 The Anduin flowed parallel to the Misty Mountains in a broad vale which formed the western part of Rhovanion, lying between the mountains and Mirkwood. After passing Lothlórien, the river and mountains parted company, and the river flowed through the Brown Lands via the North and South Undeeps until it flowed past the Emyn Muil and the Argonath and entered Nen Hithoel through Sarn Gebir, a series of ferocious rapids. Thence it flowed over the Falls of Rauros, and past the Mouths of Entwash and the marshes known as the Wetwang. It then passed between the White Mountains and the Mountains of Shadow by the capital of Gondor, Osgiliath, before swinging past the harbour of Harlond close to the Rammas Echor, south of Minas Tirith. It flowed through the port of Pelargir, entering the Great Sea in the Bay of Belfalas in a broad delta known as the Mouths of Anduin. 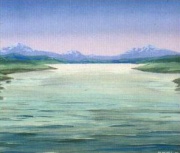 In order from north to south: the Rhimdath (Rushdown), the Ninglor (Gladden) which joined at the marshes known as the Gladden Fields, the Celebrant (Silverlode), the River Limlight, the Onodló (Entwash), the Morgulduin, the Erui, the Sirith and the Poros. The first five had their sources in the Misty Mountains, the Morgulduin and (presumably) the Poros in the Ephel Dúath on the border of Mordor, and the rest in the White Mountains.

The Old Forest Road which led from the High Pass into Mirkwood crossed the river at the Old Ford, to the south of Beorn's Halls. There used to be a bridge, this was fortified when Elendil crossed the river to go to war with Sauron, but it had been destroyed by the late Third Age. The only other bridge was in Osgiliath, but during the late Third Age, this was broken by forces of Mordor. The Ford of Carrock is mentioned during the War of the Ring.

The principal islands appear to have been Cair Andros, on the borders of Ithilien and Tol Brandir in Nen Hithoel. Carrock, in the north was where the Eagles deposited Thorin and Company. There was also an eyot, where the Fellowship rested during their travel between Lórien and Parth Galen.

During the March of the Elves in the Time of the Trees, the Nandor left the Eldarin host when faced with the great heights of the Misty Mountains, and lived in the Vales of Anduin. Some of those people later left and became the Green-elves of Ossiriand, but Elves remained present even until the time of the War the Ring, strengthed by refugees from Beleriand (at the end of the First Age) and Eregion (during the Second).

Settlements in the Vale of Anduin during the Third Age included the Éothéod city of Framsburg, Rhosgobel, Beorn's Halls and the Stoor settlements near the Gladden Fields. It was in the Gladden Fields in the northern reaches of Anduin that Isildur was slain in T.A. 2 and the One Ring lost; and it was there, more than two millennia later, that Déagol found the Ring and Sméagol took it from him.

Once it had entered Gondor the river flowed past Osgiliath and Minas Tirith and then Pelargir, close to the sea. After the fall of Osgiliath the river effectively marks the eastern limit of Gondor's influence.