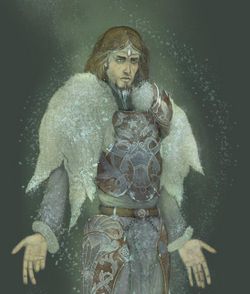 "Arvedui you shall call him, for he will be the last in Arthedain. Though a choice will come to the Dúnedain, and if they take the one that seems less hopeful, then your son will change his name and become king of a great realm. If not, then much sorrow and many lives of men shall pass, until the Dúnedain arise and are united again."
― Malbeth[2]

Arvedui married Fíriel, the daughter of the king of Gondor, Ondoher, in 1940, securing the link between Gondor and Arthedain after years of estrangement. Four years later, Ondoher was killed in a battle with the Wainriders, and died without a male heir. Arvedui sent messages to Gondor claiming the kingship of Gondor as a descendent of Isildur and as the husband of Fíriel, who, under old Númenórean law, should have become the first ruling queen. In 1945 the Council of Gondor, persuaded by the Steward Pelendur, voted against Arvedui's claim in favour of Eärnil - the distant relative of the king and the victorious general in the war on the Wainriders.[2]

When Arvedui became king in 1964, the kingdom was already in a bad state, struggling to hold back the forces of Angmar. In 1974 the Witch-king descended from the north, capturing Fornost and pushing most of the Dúnedain over the Lune. Arvedui and his men, rescued several heirlooms of Arnor such as the Ring of Barahir and palantíri of Amon Sûl and Annúminas. They held out on the North Downs but fled north and hid in old dwarven mines in the Blue Mountains before being forced to seek the aid of the Lossoth in the Ice-bay of Forochel due to hunger.[3]

"Do not mount on this sea-monster! If they have them, let the seamen bring us food and other things that we need, and you may stay here till the Witch-king goes home. For in summer his power wanes; but now his breath is deadly, and his cold arm is long."
― Chief of the Lossoth[3]

However, Arvedui did not heed their advice and gave them his ring, the Ring of Barahir, as a token of his thanks. When the ship set sail a great wind came from the north and the hull of the ship was broken on some ice, thus the last king of Arthedain died, and with him the two palantíri were lost.[3]

However, in order to finally defeat this evil, Eärnur, Círdan and Glorfindel captained a host from Gondor, Lindon and Rivendell and marched across Eriador in such a great force that Angmar was utterly defeated without a single orc from that realm left to the west of the Misty Mountains.[2]

In his last moments, Arvedui despaired and cursed himself for his pride in ignoring the warning of the Lossoth. As of the War of the Ring, his shade still lingered in the wreck of his ship in the ice near the western coast of the Icebay. At his request, the player recovered a book of heraldry that had been left in the Dwarf-mines he had hidden in, and delivered the book to the Ranger "Lothrandir".[4]