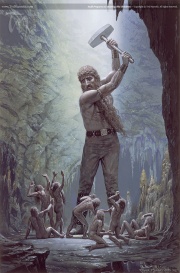 "Aulë the Destroyer" by Ted Nasmith

When the Elves came to Valinor, the Noldor became the students of Aulë and his friends.[1] Fëanor was his greatest pupil, and from him learned the craft to make the Silmarils.

In the early Gnomish Lexicon, the Gnomish version of Aulë is Óli.[9] He is also given the title Talka Marda ("Smith of the World") during the text.[10]