The Avari (Q: "unwilling"; or "the Refusers"[3]) were a branch of Elves that refused to embark on the Great Journey.

The original Elves that awakened in Cuiviénen numbered 144, in 72 pairs, and they were divided into three clans: the Minyar, which had 14 members; the Tatyar, which had 56 members; and the Nelyar (or Lindar), which had 74 members. These remained the rough proportions of the Elvish population up to the time of the Vala Oromë's invitation to the Elves to come to Valinor. The Elves entered into a great debate on whether to follow Oromë into the west. Most of the Elves were persuaded to undertake this Great Journey, including all of the Minyar, half of the Tatyar, and a little less than two-thirds[note 1] of the Nelyar. These Elves became known collectively as the Eldar, and their clans became known by new names: the Minyar became the Vanyar, the Tatyar became the Noldor, and the Nelyar became the Teleri.[4]

Those Elves who refused to take the Great Journey were called the Avari and they were not counted among the Eldar.[5] Their initial population included a little more than one-third of all Quendi and was evenly divided between Tatyar and Nelyar.[note 2][4] Some of them, especially those who dwelt furthest from the waters of Cuiviénen and wandered in the hills, had not seen Oromë at his first coming, and knew only vague, fearful rumours of the Valar; lies of Melkor concerning Oromë and Nahar perhaps had a role.[6] Many thus refused to depart from their own lands, and spread gradually throughout the wide lands of Middle-earth. According to a tradition, their leaders were Morwë of the Tatyar and Nurwë of the Nelyar. They were after known by the name "the Unwilling" because they refused the summons. It is not known to what extent the Tatyar and Nelyar among the Avari retained their original clan names after the First Sundering, but they did retain a memory of the old clans' existence and their relationship to their Eldar cousins.[4]

It is believed that some of the Avari were corrupted by Melkor (or had become evil and savage in the wild) in ancient days to become the progenitors of the race of Orcs.[7][8]

Over time, many Avari wandered westwards. Some mingled with the Nandor of the Vales of Anduin, and others entered Eriador.[1] Some time after the Laiquendi settled in Beleriand, some Avari "crept in small and secret groups into Beleriand from the South." Most of these Avari remained secretive and isolated from the other Elves, living in caves and deep in the forests, but rarely an Avar would be accepted into Sindarin society.[2] A few Avari wandered the dark and gloomy forest of Taur-im-Duinath.[9][10]

In the First Age, the Avari are said to have viewed the Eldar with jealousy and disdain and treated them with hostility, even treachery, owing to their deep and inherited bitterness.[1] However, this seems to have varied among different groups of Eldar and Avari – the Tatyarin Avari are said to have especially disliked the Noldor who returned from Aman, believing them to be deserters, but the Nelyarin Avari established close and friendly relations with their Nandor and Sindar kin, particularly in Eriador and the Vales of Anduin, to the point that they "often became merged together" (cf. the Galadhrim).[4]

The Edain who travelled to the West first met the Avari of all the Elves, and were taught from their language, which influenced theirs.[11] They taught them many of the basic crafts of civilization, though the craft of the Eldar surpassed that of the Avari, even more than that of the Avari surpassed primitive Men.[12]

It is told that no Avari were to be found west of the Misty Mountains during the late Third Age.[13] 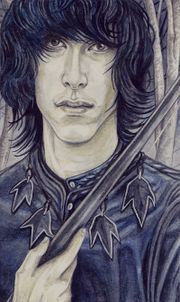 Six tribes of Avari are mentioned in the Third Age, and their names are all cognates of the Primitive Quendian word Kwendî (the Speakers): Kindi, Cuind, Hwenti, Windan, Kinn-lai, Penni.[14]

The Avari had many tribes and greatly varied languages, widely sundered from one another.[15] The names above are the only certain Avarin words ever mentioned by the Loremasters.

The Avari were called Abari in Telerin;[16] they were also called Moripendi (an equivalent of Quenya Moriquendi which referred to the Sindar as well)[17].

In older versions of the legendarium, the name Avari was originally that of the later Eldar, then meaning "those that departed".

In other, relatively late writings, a brief idea was that the Avari did not come from the three clans, but from two other clans, led by Nurwë and Morwë. This idea was later dropped. In the final conception, the Elves were divided into three tribes.