Azaghâl was the Lord of the Dwarves of Belegost during the First Age.

While traveling on the Dwarf-road in East Beleriand, Azaghâl was waylaid by Orcs; Maedhros came to his rescue saving his life and treasure, and as a token of gratitude, the Dwarf king gave him his helm made by Telchar.[1]

Azaghâl and his Dwarves joined the Union of Maedhros and during the Nirnaeth Arnoediad the Dwarves of Belegost covered the retreat of the Sons of Fëanor by surrounding the Dragon Glaurung. They hewed at him with their axes, for his scales were not strong enough to shield him from the blows of Dwarven axes. In his rage Glaurung struck down Azaghâl, and crawled over him. With his last breath Azaghâl drove a knife into Glaurung's belly, so wounded him that he fled the field with many of the dismayed beasts of Angband following. 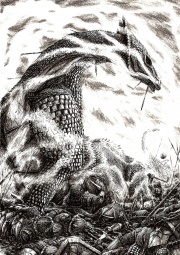 The Dwarves raised up the body of their lord and bore him away; and with slow steps they walked behind singing a dirge in deep voices, as it were a funeral pomp in their country, and gave no heed to their foes; and none dared attack them.[2]

Azaghâl is one of the few Khuzdul names known. It is not determined whether this was his birthname or an epithet. Its meaning is not known, but it has been argued that it is of the same Root as the Adûnaic verb azgara, "to wage war" and even perhaps Azog. Azaghâl would then mean "warrior".[3]