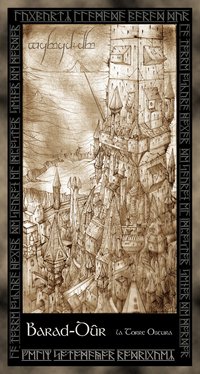 The Return of the King film also shows Barad-dûr as clearly visible from the Black Gate of Mordor. Even granting its enormous size, it was located one hundred miles away and to the east of the Gate¹, not to mention being behind the inner mountain ridges of Udûn so Aragorn's army would probably not have been able to see it. In the film version, the geography of Mordor seems generally to have been compressed somewhat, perhaps for artistic reasons related to rendering such complex stories in a visual medium. In the case of the Black Gate scene, having Barad-dûr visible from the Gate means that the army can see the Eye of Sauron staring at them.