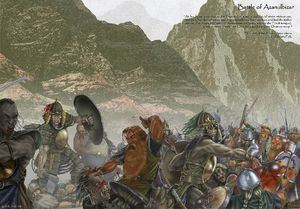 | name=Battle of Azanulbizar| conflict=War of the Dwarves and Orcs| date=2799 TA| place=The Dimrill Dale and the steps of the East-gate of Moria| result=Decisive victory for the Dwarves| side1=Dwarves| side2=Goblins| commanders1=*Thraín II *Thorin Oakenshield *[[Naín] *Daín II Ironfoot *Commanders of other Houses| commanders2=*Azog| forces1=Durin's folk, Broadbeams, Firebeards, and houses of the far East numbering at possibly 6-8,000, plus 1,000 (est.) Dwarves from the Iron Hills| forces2=Goblins of Moria, and the remnants of other Orc-dwellings throughout the Misty Mountains, (est.) at 11-15,000| casual1= Half of the force| casual2= Over 10,000, except for maybe 1-3,000 who escaped to the White Mountains| }} The Battle of Azanulbizar (Third Age 2799) was the penultimate battle in the War of the Dwarves and Orcs. It was fought beneath the East-gate of Moria in the valley of Azanulbizar, called Nanduhirion in Sindarin or Dimrill Dale in Westron. Therefore the event is also known as the Battle of Nanduhirion and the Battle of Dimrill Dale.

The War of the Dwarves and Orcs was started when Azog the Orc-chieftain of Moria captured and mutilated Thrór, King of Durin's folk. Azog carved his own name in runes onto Thrór's severed head, and then let his companion Nár escape so that all Dwarves would know that an Orc now ruled Moria. Full of righteous fury, Thrór's son Thráin II gathered a great army of Dwarves, including those not of Durin's folk (Firebeards and Broadbeams from the Blue Mountains and those from the far East of Middle-earth). For six years they systematically destroyed the Orc-holds of the Misty Mountains, until only Moria was left where those Goblins that survived the destruction fled.

The battle started on a dark day of cold winter with no sun, when the Dwarves marched into the Dimrill Dale where they saw the great East-gate and sent up a great noise. They soon discovered that on the western slopes above many Orcs had gathered and more were coming out of the East-gate, outnumbering them and holding the higher ground. The first Vanguard led by King Thraín, assaulted the slopes but were driven back with loss, into a wood near the Mirrormere, where Frerin youngest son of Thraín was slain along with Fundin, father of Balin and many others. Thraín himself was wounded, along with his eldest son Thorin II Oakenshield, who's shield broke during the battle and had to use an oak branch that he hewed off a tree to defend himself.

Elsewhere, the battle swayed to and fro until Náin from the Iron Hills, arrived with a host of fresh troops with him. Naín, and his Dwarves hewed through the Orc lines with their mattocks shouting AZOG! AZOG! AZOG! until they got to the very steps of the gate, in-which Naín called Azog to come out and fight, which Azog emerged from the inner gate along with his guards, but Naín was very tired and half blind with rage and tried to swing as hard as he could at Azog but the orc darted aside, and he missed, which splintered his mattocks on the ground. The orc kicked him in the leg when he dodged the Dwarf's blow, making him stumble, at which Azog tried to cut-off his head but Azog only broke Naín's neck because of the strong mail he was wearing, Naín died instantly . Azog laughed at this, but when he looked out into the valley he found that his entire force was near destroyed and those that could were fleeing southwards, and that all his guards were killed as well. With that he fled back to the gate, but Náin's son, Dáin, leaped up the steps after him with his red axe and just before the gate he hewed off Azog's head, thus ending the war. He was just 32-years old at the time, very young for a Dwarf, and it was remarked an amazing feat. Dáin would later become King under the Mountain as Dáin II Ironfoot.

The Dwarves were victorious, but with a heavy casualties with half of their forces dead. But the Orcs casualties were over ten thousand. After the battle, King Thráin wanted to enter and reclaim Moria, the ancestral home of Durin's folk. However, the Dwarves had taken heavy losses and the Dwarves of the other Houses did not see any benefit in it for them unless they got some treasure from Moria. More significantly, Dáin had peered beyond the East-gate and saw that Durin's Bane still lingered within and advised Thráin not to enter. They then stripped the dead, so the orcs couldn't plunder them, and felled all the trees in the valley which they made many pyres with, and put there dead on them to burn. For they could not bury them all in fashioned tombs of stone, as was their custom for it would take many years. So those that fell in that battle were known proudly as Burned Dwarves. The Houses then parted ways, returning to their homes to the North, East, and West.

Thráin with the rest of the host, went back to Dunland and shortly afterwards wandered in Eriador till they settled in the Northern Blue Mountains. There Durin's folk regrew slowly in population and waited till the days they could take back the halls of Erebor, and Khazad-dum.