The Battle of Dale and the subsequent Siege of Erebor were decisive battles in the northern theatre of the War of the Ring. Even though it cost the lives of Kings Dáin Ironfoot and Brand of Dale, it was a decisive victory for the Free peoples.

The Dwarves of Erebor and the Men of Dale refused to acknowledge the overlordship and alliance of Sauron.[2] While his southern armies menaced Gondor, the Dark Lord sent an army north to extend his dominion to prevent the armies of his enemies joining together under one banner, which could have proved disastrous for Mordor. 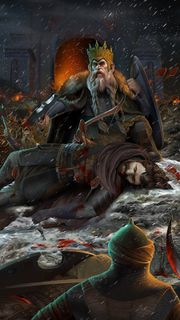 Steamey - King Brand and King Dáin Ironfoot
On 17 March 3019, Sauron sent a large contingent of Easterlings to attack Dale. The combined forces of the Men of Dale under King Brand and the Dwarves of the Lonely Mountain under King Dáin Ironfoot marched out to meet the Easterlings in battle. After three days of heavy close-quarters fighting, they were forced to retreat towards the Lonely Mountain.[3]

The armies fought bravely before the Gate of Erebor, which was not taken. In the end, Dáin was killed as he stood defending the body of his ally Brand.[1] Meanwhile, the defenders of the Mountain were able to withstand the siege.[3]

However, the forces of Gondor and Rohan defeated the main power of Sauron in the Morannon theatre on 25 March, causing the northern army to lose hope. Seeing the morale of their foes being sapped by news of victory in the south, the Army of Dale under the new Kings - Bard II and Thorin III Stonehelm - managed to lift the siege on 27 March and drove the Easterlings out of Dale.[4]