Battle of the Pelennor Fields

The Battle of the Pelennor Fields was the greatest battle of the War of the Ring, and indeed the largest of the entire Third Age.

After the fall of Osgiliath there was no longer a barrier against the forces of Mordor, which moved on the Pelennor Fields before the city on 15 March T.A. 3019 as the Great Darkness blotted out the sun. Almost all of Minas Tirith's civilian population was evacuated prior to the siege, and were sent southward to Gondor's southern fiefdoms.[1]

Mordor's troops consisted of some 18,000 Easterlings and Haradrim,[2] several Haradrim war Oliphaunts, and tens of thousands of Orcs; the defenders' numbers were considerably less. The city's garrison likely was no more than 4,000,[source?] the survivors from Osgiliath probably numbered around 1,000[source?] (One third of that garrison were killed), there were about 6,000[source?] men from southern Gondor who arrived just before the siege commenced.

Mordor's hosts set fire to the plains and farms outside of the city and hewed apart anyone they found, living or dead. The Orcs began digging trenches and setting up siege equipment and catapults. These were out of range of the city's defenses, as was the city out of theirs. Some of the defenders laughed and mocked this effort, one even claiming that Sauron himself could not break through Minas Tirith's walls.[3]

Their laughter turned to peril and fear, however, when Mordor's massive catapults flung their shot extremely high, well over the city's walls and into the first level. Through Sauron's arts many projectiles detonated and burst into flame. Along with these the Orcs also launched the heads of Gondor's fallen soldiers and other Men they had slain over the walls, causing despair among the defenders.[3] Though these machines could still not inflict serious harm to the immense first wall, the great battering ram Grond (named after Morgoth's weapon from the First Age) was put into action.

At midnight Grond rolled to the face of the city. The Witch-king cried out evil spells unto it, breaking the mighty main gate in only three swings, and the Witch-king rode into the city unchallenged, save by Gandalf. Before Gandalf's strength was put to the test, however, the cock crowed and the horns of Rohan were heard as around 6,000 of their riders joined the battle. Mordor's strategy for keeping Rohan out of the battle had failed twice, both through the defeat at Helm's Deep and the blockade in Anórien. So the Witch-king was forced to ride out and attack them instead of fighting Gandalf and destroying the city.

King Théoden's charge drove the Mordor forces from the northern half of the field, and charging the Haradrim cavalry he slew the Southron chieftain, the Black Serpent, and cut down his standardbearer.[4] Mordor's forces counter-attacked, however, and the Witch-king, having rode out to fight Rohan's charge, set upon them and racked them with fear.

When the Witch-king's fell beast attacked King Théoden of Rohan, the king's horse Snowmane lost control, and was hit by a black dart. Snowmane fell with the king atop him, and the horse landed on him, mortally wounding him. All about the King were his slain knights, and any survivors fled from the Witch-king's terrifying visage. The fell beast raked its claws upon Snowmane's neck and readied to devour Théoden, but the warrior Dernhelm, defending the king's body, stood tearful yet defiant, forbidding the Witch-king to defile the king's corpse. The Witch-king mocked him, telling him that no living man might hinder him. Éowyn threw off her disguise as Dernhelm and revealed herself as "no man at all". The Black Captain remained silent, as if he hesitated slightly due to Glorfindel's prophecy, but heeded it no longer, ignoring the Hobbit Merry nearby and attacking Éowyn with great malice. She slew his fell beast, but the Witch-king rose from it, towering over her. With a violent cry that stung her ears like venom he threw his black mace upon her shield, splintering it and shattering her arm. She fell to her knees in bitter pain and he loomed over her, raising his mace to kill her. However, before he could do so, the Witch-king too fell; Merry had wounded him with a sword that had been forged centuries before during the war between Arnor and Angmar and which contained spells against the Witch-king. The spells finally found their target, for the Witch-king was distracted and possibly seriously weakened. Éowyn, with her last strength, drove her sword into the Witch-king's crown, her sword shattering and the Black Captain of Mordor slain, his spirit fading into a shrill voice on the wind. The Black Breath caused both Merry and Éowyn to become gravely ill, and Éowyn's ruined arm kept her from fighting any further that day. They were sent to the Houses of Healing in the city, and command of the Rohirrim then passed to Théoden's nephew and heir, Third Marshal Éomer. Though a demoralizing blow to Mordor's forces on the field, they held together, and Gothmog, Lieutenant of Minas Morgul, assumed command.

At the same time, Faramir, son of Denethor, Steward of Gondor, was also gravely wounded. Despairing at the visions of defeat that Sauron had sent him via his palantír, and believing Faramir to be beyond aid, Denethor prepared to burn himself and his son upon a funeral pyre.[5] Only the intervention of Peregrin Took and Gandalf saved Faramir, but Denethor immolated himself before they could prevent him.

Meanwhile, the battle turned against the Rohirrim. The Southrons charged with their Mûmakil and wherever they went horses went wild with fear or were trampled underfoot, and the forces of Mordor rallied around them like islands of defence that the Rohirrim cavalry could not overtake. Éomer, grim after the death of Théoden but shocked by the unexpected (seeming) death of his sister Éowyn, the last living member of his family, flew into a berserker rage and charged his cavalry headlong into the larger enemy forces. So great was the wrath of the outnumbered Rohirrim at the death of their King that they broke through the superior Mordor forces, hammering deep wedges into the Mordor legions' front lines. His fury betrayed him, however; the horses panicked at the sight of the towering Mûmakil, and the Haradrim retreated amongst them. Gothmog retaliated against Éomer's advance, sending fierce Variags, elite Haradrim warriors, and monstrous Troll-men against the Rohirrim, and they were set into despair. The cavalry of Rohan were cut off from the rest of their allies. Éomer and his forces retreated to the docks near the Harlond south of the city where he desperately circled up his men on a hill and prepared to fight to the death. When he saw enemy reinforcements sailing up the River Anduin, he sang a solemn and sorrowful dirge, though laughed as he did, preparing to die defiantly as Rohan's final leader. 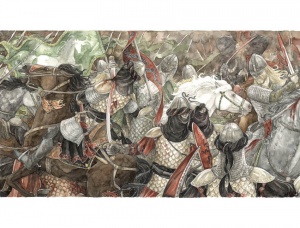 One of the visions that Denethor had seen was of a fleet of enemy ships with black sails arriving at the landings to the south of the Pelennor in the Rammas, but what he had not seen was that they were actually manned by Aragorn and other Rangers of the North, Gimli, Legolas, Elladan, Elrohir and many reinforcements from southern fiefdoms of Gondor.[6] As Aragorn's army drove north a great part of Mordor's forces were pinned between Aragorn and Éomer's cavalry, and were "caught between the hammer and the anvil". Without the Witch-king's leadership, and with vast numbers encroaching them on all sides, many of Mordor's troops panicked and began to flee; Aragorn's army then linked with Éomer's, and with their aid the tide of battle was finally turned. Despite the Orcs engaging in a cowardly and disorganized retreat, many Easterlings and Haradrim held their ground and fought proudly to the death, delaying the Western host and allowing others to rout. The vicinity of the Rammas Echor was soon empty of Sauron's forces, and a brief respite was won until the final battle before the Black Gate.

There is no clearly stated final death toll for the Battle of Pelennor Fields. There is a definite figure for the army of the Rohirrim that came to Gondor's defence; it consisted of 6,000 riders,Cite error: Closing </ref> missing for <ref> tag