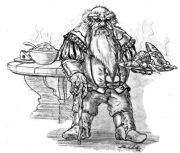 These dwarves moved to moria with the firebeards until it was destroyed by Durins Bain. Then probably moved back and rebuilt at least one of the cities of the Blur mountains.