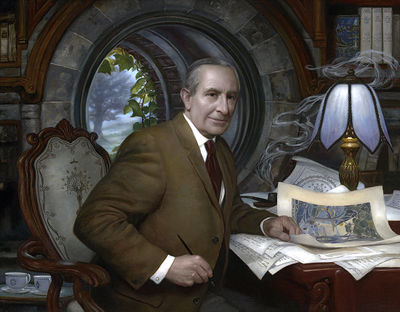 J.R.R.Tolkien by Donato Giancola
Canon is a term to refer to consistent "absolute truth" in literature, religion and fiction, in contrast to apocryphal tales of "lesser" significance and value. Many sophisticated works of fiction have some canon that refers to the corpus of the officially-released works and aims to internal consistency. For a full definition, see Wikipedia:Canon (fiction).

It is difficult to speak of what is "true" in the context of J.R.R. Tolkien's legendarium, or which texts should be considered part of the canon.

"...there are Tolkien's latest thoughts, his best thoughts, and his published thoughts and these are not necessarily the same."
― Tolkien's Legendarium: Essays on The History of Middle-earth

There are various reasons that make the idea of a Tolkien canon problematic:

"I am doubtful myself about the undertaking. Part of the attraction of the L.R. is, I think, due to the glimpses of a large history in the background: an attraction like that of viewing far off an unvisited island, or seeing the towers of a distant city gleaming in a sunlit mist. To go there is to destroy the magic, unless new unattainable vistas are again revealed. Also many of the older legends are purely 'mythological', and nearly all are grim and tragic: a long account of the disasters that destroyed the beauty of the Ancient World, from the darkening of Valinor to the Downfall of Númenor and the flight of Elendil."
― The Letters of J.R.R. Tolkien, Letter 257

As only The Hobbit, The Lord of the Rings, The Adventures of Tom Bombadil, and The Road Goes Ever On were published during Tolkien's lifetime, only those works should be considered "true" canon with respect to Tolkien's publication history. Tolkien himself considered the published works as "fixed" and tried not to introduce new concepts that would contradict or alter them, while elements he left unpublished, he continued to experiment on.

Christopher Tolkien compiled an approximation of what his father might have produced when The Silmarillion was published. However, he warned readers not to look for consistency between this book and those published by his father. Throughout his commentaries in The History of Middle-earth, Christopher has pointed out many discrepancies between his final editorial selections and alterations and what he later believed would have been his father's true intentions.

Furthermore, the chapters in the published Silmarillion about the ruin of Doriath and the fall of Gondolin, especially the former, were largely written by Christopher Tolkien and Guy Gavriel Kay, to fill in gaps in the available story, and therefore do not represent J.R.R. Tolkien's own ideas about how those stories should be handled.

Unfinished Tales consists of essays and stories composed after The Lord of the Rings which were generally consistent with The Lord of the Rings. The book reveals parallel traditions regarding the history of Galadriel and Celeborn, the nature of the Istari, and a few minor sub-plots. Although some people[who?] argue that the book is generally acceptable as canon, readers must bear in mind the fact that no true consistency exists between these unfinished tales and the earlier works.

The various texts published in The History of Middle-earth date from all periods of Tolkien's life and generally exclude the more finished sections used for the published works.

When handling two or more inconsistent elements of Tolkien's legendarium, there are at least two (sometimes overlapping, sometimes conflicting) rules of thumb according to which a Tolkienist can apply criticism and determine which is more valid over the other.

Final intent
This principle follows the axiom that Tolkien's legendarium is a work that was revisioned towards maturity and refinement, therefore later ideas are more valid than earlier ones. For example, in one of his Last Writings (q.v.) near the end of his life, Tolkien wrote that the Blue Wizards played a big role in the East. This can be considered the "final word" on the matter, obsoleting an earlier idea (stated in Letter 211) that they fell like Saruman.
Height intent
This principle considers that by the writing of the Lord of the Rings the legendarium had reached its peak of maturity. Afterwards, Tolkien's personal and unpublished writings presented a "decline" and were mainly experiments with philosophical matters of Arda, which sometimes contradicted the established works. These were eventually abandoned or left unfinished. Such concepts include the Round World version of the Silmarillion, or the 1960 partial rewrite of The Hobbit.

An example of the canon question is the lineage of Gil-galad. In the published Silmarillion he is said to be the son of Fingon, but as disclosed in The War of the Jewels Tolkien considered many arrangements before apparently deciding that he was the son of Orodreth, who would then also be displaced as a son of Finarfin and turned into Finarfin's grandson instead. Also, most people think Finwë had three children, all sons; Fëanor by his first wife Míriel, and Fingolfin and Finarfin by Indis. However, this is incorrect, since he also had two daughters, Findis and Írimë, by his second wife (Findis was in fact Finwë's first child by Indis), thus Finwë had five children. If the published Silmarillion is taken as canon all later material must be discarded, but if the later writings by Tolkien are taken as canon the Silmarillion must be rewritten, a task which Christopher Tolkien has stated he will not do as he is now retired. So we are left with a Quenta Silmarillion which contradicts the original author's intentions, but which is the only authoritative narrative in existence for most of the traditions. The latter third of the Quenta Silmarillion in particular was never rewritten by Tolkien as a whole after the early narrative of his youth.

A further problem is reconciling The Hobbit with The Lord of the Rings. In 1947, Tolkien suggested to his publisher, George Allen & Unwin, that The Hobbit required revision to make it more consistent with the then nearly finished sequel. In 1950, Tolkien was surprised to be informed that the publisher had incorporated his 1947 suggestions into a new edition of The Hobbit. When he received the proofs for this update he subsequently altered some of the as-yet unpublished material in The Lord of the Rings to more fully conform to the changes Allen & Unwin had made to The Hobbit.

Among inconsistencies which survived into the second edition, Bilbo and the Dwarves took far too long to reach Rivendell when a map from The Lord of the Rings was used to gauge the distance, which can only be explained with great difficulty if at all. There are additional problems as well, such as the exact location of the Troll encounter. When he began writing The Hobbit Tolkien did not intend for it to be part of his Middle-earth mythology, but was simply populating an imaginary landscape with characters and locations for a children's adventure story. Nonetheless, for his own amusement, Tolkien borrowed several references to his unpublished mythology to give the story a sense of depth. Thus Gandalf and Thorin wield swords from Gondolin, and Elrond, ruler of Rivendell, is Half-elven.