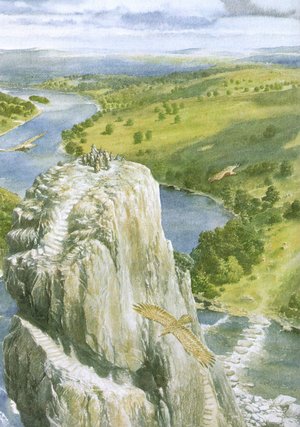 Alan Lee illustrates Thorin and Company atop The Carrock while Eagles circle above.

Carrock is a stony eyot in the upper reaches of the River Anduin, to the north of the Old Ford.

In Chapter 7 of The Hobbit, Gandalf states that the steps from the base of the rock to the flat top were made by Beorn and that "Carrock" is Beorn's name for it. This is somewhat of a linguistical joke on Tolkien's part, since car in Anglo-Saxon means "rock".