Dale was a township of Men lying between Erebor and Esgaroth. It was destroyed when Smaug the dragon descended on the Dwarf-kingdom of Erebor. For one-hundred seventy-two years city lay in ruins, until the Battle of Five Armies. After the battle, Dale and was refounded by Bard the Bowman , the descendant of its royal line. Dale, once again was a prosperous city. It had a long lasting friendship with the Dwarves of Erebor and the Iron Hills, and the people of Lake-Town, trading with them and allying with them in times of war.

During the War of the Ring, the Easterlings attacked the city. Not able to hold the Easterlings back the Men of Dale and their allies, the Dwarves of Erebor, retreated into the the Lonely Mountain, but not without losing both Dale and Erebors' kings Brand and Dain II Ironfoot who were both slain at the gates of the mountain. For seven days the Men and Dwarves barricaded themselves in Erebor until news came from the south of the defeat of Sauron, the new kings of Dale and Erebor (Bard II and Thorin III Stonehelm), broke the siege and chased the Easterlings out of Dale. After the siege, the Men of Dale rebuilt Dale, with the help of the Dwarves. Bard also sent an emissary to the coronation of king Elessar. 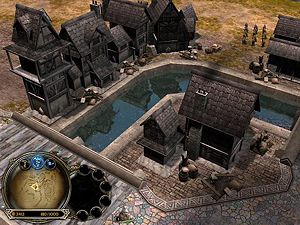 An overview of the city of Dale in the game.

2006:The Lord of the Rings: The Battle for Middle-earth II

The City of Dale appears in the Erebor map, just southeast of the mountain itself. It appears to contain several houses, taverns and bridges, as well as a statue of a man. The city is built around the mountain's river.