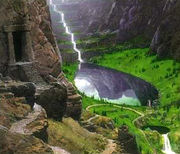 During the Years of the Trees, Durin the Deathless wandered south to Dimrill Dale and founded the Kingdom of Khazad-dûm beneath the surrounding mountains. Thousands of years later, after Orcs had turned the Dwarven city into the "Black Pit" of Moria, the climatic battle of the War of the Dwarves and Orcs was fought here. The Battle of Azanulbizar, which occurred in T.A. 2799,[2] ended as a defeat of the Orcs and their leader Azog. The Dwarves, though, were unable to take back Moria because of the Balrog that still dwelt there.[3]