Dunlendings, also known as the Gwathuirim, were the ferocious, tall and vicious men that lived in Dunland, close to Rohan. Also called the Wild Men of Dunland, they had long been enemies of the Rohirrim, because they were jealous that the rich lands of the old Númenórean province of Calenardhon were granted by the Gondorians to the Rohirrim instead of them.

The ancestors of the Dunlendings were also the ancestors of the Haladin, the second of the Three Houses of the Edain who were reclusive, kept separate from the Bëorians or the Hadorians and their language was different from those spoken by the other Edain.

Those who remained in Eriador, settled upon either side of the Gwathló or in the Ered Nimrais; especially those in Minhiriath, were (as later Gondorian historians recognized) akin to the Haladin.

In the Second Age those peoples ranged over much future Gondor and Eriador, and dwelt in the forests of the shorelands. But the Númenóreans returning to Middle-earth treated them ruthlessly and devastated their forests. While the Men of the Mountains survived in isolated places, others (overcoming their fear of the Elves) fled from Minhiriath into Eryn Vorn; those from Enedhwaith took refuge in the eastern mountains that would become Dunland.[2] Some moved even further north until they reached what became the Bree-land, those were the Men of Bree who would be absorbed into Arnor.

Because of the Númenórean advance, those peoples, including the Dunlendings, remained bitter enemies of the West.[3] The hostility of the Dunlendings prevented the Dúnedain to populate permanent settlements in Enedhwaith except in the fortified town of Tharbad.[4]

While some of the Pre-Númenóreans were absorbed into the population of Gondor and Arnor, the Dunlendings remained unaffected, independent and even unfriendly to the Dúnedain, holding their own manners and language.[5] However the Dunlendings also remained hostile to those with Orc-blood[6]. The Dunlendings also dwelled alongside the Stoor Hobbits during their Wandering Days and the latter even formed a related language to theirs.[5]

The Dunlendings suffered from the Great Plague less than other peoples owing to their isolation[5] and were still found in the foothills of the Misty Mountains. By the time of the Ruling Stewards they ceased to be subjects of Gondor and, being surrounded by barbarous folk[7], they moved to settle the region of Calenardhon as Gondor ceased to man the garrisons during the Watchful Peace.[8]

Some Dunlendings approached the Gondorian fortress of Isengard (Angrenost) that was manned by a small garrison led by a hereditary Gondorian chieftain, the Lord of Isengard, and mingled with the Gondorians. With time the line of the original chieftains eventually failed.[8]

Arrival of the Rohirrim 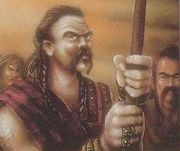 In T.A. 2510 Gondor granted Calenardhon passed to the Eotheod who came from Rhovanion and the wild hillmen and herd-folk who the Dunlendings viewed as competitors and usurpers. As the ensuing enmity did not concern the Stewards of Gondor, the Dunlendings kept hostilities to the Rohirrim and attacked whenever the latter were weak or in trouble.[8]

Because of their connections, the people of Isengard remained more friendly to the Dunlendings than to the 'wild Northmen', allowing them to settle in and around the Ring of Isengard. Eventually the Dunlendings seized control of the fortress and killed any of the ancient guards who didn't merge with them.[8]

Kings Brego and Aldor drove the Dunlendings out of Rohan beyond the Isen until Enedhwaith. After the death of King Aldor, and as Isengard became more friendly to them, the Dunlendings passed and settled northern Westfold, the mountain glens around the Ring, and southern eaves of Fangorn Forest, becoming openly hostile.[8] In some places, the two peoples mingled in some peaceful circumstances; and the dark-haired Landlord Freca from the lands near Adorn had Dunlendish blood[9]

During the reign of King Déor, they began raiding over the Isen; when it became clear that the raiders were coming from near Isengard, in T.A. 2710 Déor led an expedition to the north. He found and defeated a host of Dunlendings, but discovered that Isengard was hostile. He was unable to drive them out as Steward Egalmoth could not send help.[8] The occupation lasted through the reign of King Gram and they continued to raid and harass the Rohirrim.[9]

The worst of these incidents was when Freca's son, Wulf, allied with the Corsairs of Umbar who were in turn stirred by Sauron, keeping safe his properties at Adorn. Joining his kin from outside of Rohan with enemies of Gondor that had landed in the mouths of Lefnui and Isen, Rohan was invaded from the East, the Isen and Isengard, and finally Wulf took Edoras in T.A. 2758. Gondor, fighting Corsair fleets, could not help[9] as the people of Rohan survived the crisis due to the leadership of King Helm Hammerhand, the usurping Dunlendings were reduced after the Long Winter and finished off by Fréaláf. The Rohirrim now kept a strong force in north Westfold.[8]

Eventually many Dunlendings were found later in the Westfold of Rohan, until Folcwine, aided by Gondor, reconquered it.[9] But the people remaining between Isen and Adorn were largely of mixed blood, and not loyal to Edoras.[8]

The Dunlendings were employed by the wizard Saruman to serve Sauron's purposes by attacking and raiding the cities and settlements of Rohan. Since Gríma Wormtongue had corrupted the mind of King Théoden, the fighting men of the Rohirrim were absent for the most part. As a result, the Dunlendings easily overpowered the old men and young boys who remained.

Wild Men were also present at the Battle of the Hornburg (Battle of Helm's Deep), as well as Half-orcs, derived from Orcs and the Men of Dunland. The fighting was vicious, but the Dunlendings surrendered after Gandalf appeared. In contrast, the Orcs fled into the forest of Fangorn and were destroyed by Huorns.

Saruman's defeat at Isengard put a stop to Dunlending aggression in Rohan. However, The Scouring of the Shire by Saruman, under the alias of Sharkey, was carried out with the backing of a considerable number of Dunlendings.

Dunlending is a name in the language of Rohan (represented by Old English) which refers to the people's swarthy and dark-haired appearance.[10] The element dunn means "dark, dusky, dull-hued". The name is derived from Dunland; the suffix -ing denotes a people-group (as in Eorling, Barding, Beorning, etc.).

A Sindarin name for the Dunlendings was Gwathuirim[4] (gwathui "shadowy" + rim "people").[11]

In an earlier draft of the chapter Flotsam and Jetsam Aragorn comments that the regiments of rather tall, dark-haired, not particularly evil-looking men that Merry watched coming from Isengard to attack Rohan are Dunlanders. Aragorn describes them as an upland folk from the west of the Misty Mountains, remnants of the old peoples that once dwelt in Rohan and all about to the north and south of the White Mountains (which were called Black Mountains in this earlier draft).[12] In the earliest draft of the chapter the Muster of Rohan it is mentioned that the forgotten men who built Dunharrow went away to mingle with the people of Dunland or the folk of Lebennin. It it also mentioned that some folk reckoned as Rohirrim and that spoke the language of Rohan, but dark with grey eyes with the blood of the forgotten men in their veins lived at Dunharrow. In this earliest draft no Pûkel-men are mentioned.[13] In a later draft it is also mentioned that Dunlanders came to the muster at Dunharrow to fight against the forces of Sauron.[14] In an outline for Book Five some folk from Dunland come to Minas Tirith to join Gondor in the fight against Sauron.[15]

It is possible that the rivalry between the primitive Dunlendings and the blond-haired, pseudo-Anglo-Saxon Rohirrim who migrated into the lands neighboring them was meant by Tolkien to be analagous to the real life conflicts that arose between the Anglo-Saxons in England and neighboring Celtic peoples.

Men and Women of Dunland

The Dunlendings are not a unified entity, but rather a collection of clans named after their spirit animal (ox, boar, stag, falcon, dragon etc.) who often raid one another, with some weaker clans either enslaved or outright wiped out. Many wish to see all of Dunland unified as one and that dream was exploited by Saruman, although not all clans joined with him and many oppose his influence either openly or in secret. Large clans span over multiple villages, and each village is led by a hereditary "Brenin" advised by a council of "Brehures". Most Dunlendings are simple farmers and herdsmen and their buildings are made of wood, straw and raw stone. All Dunlending men and women of age feature prominent facial markings, whether they are face paint or permanent tattoos is not specified.