Durin's Bane refers to a specific Balrog who was not otherwise named. It would surely have served its master Morgoth during the First Age. It apparently survived the defeat of Morgoth in the War of Wrath and escaped to hide beneath the Misty Mountains.

For more than five millennia, the Balrog hibernated in its deep hiding place at the roots of the mountains in Khazad-dûm. It remained undisturbed throughout the Second Age and most of the Third, before the mithril-miners of Dwarf-King Durin VI awoke it. Durin was slain by the creature, at which point it became known as Durin's Bane.

The Dwarves attempted to fight the Balrog, but its power was far too great. Despite their efforts to hold Khazad-dûm against it, King Náin and many of the Dwarves were killed and the survivors were forced to flee. This disaster appears to have also reached the Silvan Elves of Lothlórien, many of whom also fled the "Nameless Terror" (it was not recognized as a Balrog at the time). The elves began to call the place Moria, "The Black Pit".

For five hundred years, Moria was left to the Balrog.

Sauron began to put his plans for war into effect around the year 2480 of the Third Age. As part of these, he sent Orcs and Trolls to the Misty Mountains to bar all of the passes. Some of these creatures came to Moria. It is unclear as to whether Sauron could have controlled the Balrog (they were both Maiar) but it is probable that they would have been allied against the "common good". The Balrog did allow the Orcs and trolls to remain in Moria while it dwelt there. We do not know whether Sauron was aware of the Balrog's presence prior to this time.

The Battle of Azanulbizar was the climactic battle in the War of the Dwarves and Orcs. It took place before the eastern gate of Moria in 2799 and was a victory for the Dwarves. However, the victors did not conquer Moria because Dáin Ironfoot, having slain the Orc Azog, felt the terror of the Balrog at the gate. Despite a failed attempt to recolonise Moria by Balin in 2989, Durin's Bane remained a menace in the ancient kingdom of the Dwarves whose nature was hidden to the outside world. 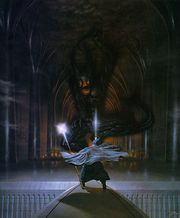 The Balrog by Ted Nasmith

During the War of the Ring

In January of 3018, the Fellowship of the Ring travelled through Moria on the way to Mount Doom. There they encountered Durin's Bane at the Bridge of Khazad-dûm. The Elf Legolas instantly recognised the Balrog despite having never seen one before. More importantly, the Wizard Gandalf was there (perhaps for this very purpose); knowing that it was far more powerful than even the greatest of his companions, he challenged it.

Since Gandalf and the Balrog were both Maiar, they were beings of the same order. As they faced each other, Gandalf broke the Bridge in front of him, but as the Balrog fell it wrapped its whip around Gandalf's ankle, which dragged him down to hanging onto the edge. As the Company looked in horror, Gandalf said, "Fly, you fools!" and let go. Neither he nor the Balrog was killed by the fall, and Gandalf pursued the creature for eight days until they climbed to the peak of Zirakzigil. Here they fought for two days and nights. In the end, the Balrog was cast down and it broke the mountain-side as it fell. Gandalf himself died following this ordeal, but was later sent back to Middle-earth with even greater powers as Gandalf the White.