"Since they were to come in the days of the power of Melkor, Aulë made the dwarves strong to endure. Therefor they are stone-hard, stubborn, fast in friendship and in enmity, and they suffer toil and hunger and hurt of body more hardily than all other speaking peoples; and they live long, far beyond the span of Men, yet not forever. . ."
― The Silmarillion, Of Aulë and Yavanna

The Dwarves, or Khazâd, were beings of short stature, often friendly with Hobbits although long suspicious of Elves. They were typically blacksmiths and stoneworkers by profession, unrivaled in some of their arts even by the Elves.

Main Article: History of the Dwarves

Unlike Elves and Men, the Dwarves are not counted among the Children of Ilúvatar. They were created by Aulë the Smith. They were kept asleep until the creation of the Elves. Aulë created the Seven Fathers of the Dwarves, from whom all other Dwarves are descended. Aulë's work was doomed, though, because he did not have the power to grant independent life to his creations - that power belonged to Ilúvatar alone. Aulë later repented and confessed to Ilúvatar. When the Dwarves were completed, though, the voice of Ilúvatar spoke to Aulë and agreed to grant them true life, and include them in His plan for Arda. Ilúvatar granted the Dwarves life, and therefore they are known as the Adopted Children of Ilúvatar.

Dwarves as portrayed in The Battle for Middle-earth II game.

They mined and worked precious metals throughout the mountains of Middle-earth. In many ways, they were in between the Elves and Men. They were not immortal, but lived to two hundred and fifty years or more. They were generally less corruptible than Men, but committed their share of rash and greedy acts. (Among these are the slaying of Elu Thingol and the dispute over the Nauglamír, which first brought suspicion and hate between Elves and Dwarves)

The Dwarven language was created by Aulë, and was known as Khuzdul. It was a strange language to Elves and Men, and few non-Dwarves learned it, also because they kept it secret. However, one Dwarven phrase is well known: the ancient battle cry, going back to at least the First Age: "Baruk Khazâd! Khazâd ai-mênu!", which means "Axes of the Dwarves! The Dwarves are upon you!"

The Dwarves were known for their strength and endurance in battle, as well as their fury, especially when revenging their kin, and being some of the greatest warriors in all of Middle-earth. They fought in many wars and battles over the ages of Middle-earth's existence, among which were:

Houses of the Dwarves

Most Dwarves mentioned in Tolkien's works are of Durin's folk, the clan founded by Durin I of Khazad-dûm, called the Longbeards. (A notable exception are the inhabitants of the dwarf-cities of Nogrod and Belegost in the Blue Mountains, spoken of in The Silmarillion). The seven different groups of Dwarf-folk originated in the locations where the Seven Fathers of the Dwarves first awoke before the First Age. There were three pairs of Dwarf Fathers that awoke together, and their Folk would build their halls near each other, though Durin himself had awoken alone. (In his letters, Tolkien adds that all the Dwarf Fathers except for Durin also had wives who awoke with them). Therefore the halls of the Longbeards at Khazad-dûm were not located near the halls of another Dwarf-kingdom. The seven clans of the Dwarves were:

There was also an eighth group of Dwarves that was not a separate member from these seven kindreds, but composed of exiles from each: the Petty-dwarves, who were hunted like animals to the point of extinction by the Elves in the First Age.

Dwarf-women made up only about a third of the total population. They seldom walked abroad, and that only in great need. Dwarf-women are also so alike in voice and appearance, and garb when they must travel, that it is hard to tell them apart from Dwarf-men. It is because of the fewness of women that the Dwarf population increases slowly. Dwarves only take one husband or wife in their lifetime, and are jealous, as in all matters of their rights. The number of Dwarf-men that marry is actually less than a third, and not all the Dwarf-women take husbands either; some desire none, some want one they cannot have, and will have no other one. There are also many Dwarf-men that don't want a wife, because they are obsessed with their crafts.

They are also seldom named in genealogies. They join their husbands' families. But if a son is seen to be 110 years than his father, this usually indicates an elder daughter. Thorin Oakenshield's sister Dís was named simply because of the gallant death of her sons Fíli and Kíli. The sentiment of effection for sister's children was strong all peoples of the Third Age, but less so among Dwarves than Men or Elves among whom it was strongest.

Dwarf-characters in The Lord of the Rings and the Hobbit 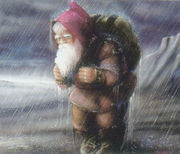 Thorin Oakenshield brought twelve Dwarves to Bag End to recruit Bilbo for their treasure hunt in The Hobbit. The Twelve Dwarves were:

Dain II Ironfoot, lead more than five-hundred heavily armed Dwarves, to the Lonely Mountain to aid Thorin Oakenshield, and ended up participating in the Battle of Five Armies. He would later become King Under the Mountain.

Gimli son of Glóin joined the Fellowship of the Ring and befriended Legolas of Mirkwood in The Lord of the Rings.

The Dwarves called themselves the Khazâd, the name Aulë gave them; this translates as the Hadhodrim in Sindarin, and the Casari in Quenya. Casari was the common word for Dwarves among the Noldor, but the Sindar usually called them the Naugrim or Nogothrim, the Stunted People.

Almost all the names of the dwarves of Middle-earth are taken from the Icelandic saga of Völuspá.

According to Tolkien, the "real 'historical'" plural of dwarf is dwarrows or dwerrows. He once referred to dwarves as "a piece of private bad grammar" (Letters, 17), but in Appendix F to The Lord of the Rings he explains that if we still spoke of dwarves regularly, English might have retained a special plural for the word dwarf as with man. The form dwarrow only appears in the word Dwarrowdelf, a name for Moria. Tolkien used Dwarves, instead, which corresponds with Elf and Elves, making its meaning more apparent. The use of a different term also serves to set Tolkien's Dwarves apart from the similarly-named creatures in mythology and fairy-tales.

The enduring popularity of Tolkien's books, especially The Hobbit and The Lord of the Rings, has led to the popular use of the term dwarves to describe this race in fantasy literature. Before Tolkien, the term dwarfs (with a different spelling) was used, as seen in Snow White and the Seven Dwarfs. In fact, the latter spelling was so common that the original editor of The Lord of the Rings "corrected" Tolkien's dwarves to dwarfs (The Letters of J.R.R. Tolkien, 138).

In the earliest versions of Tolkien's Middle-earth mythology (see: The History of Middle-earth) the dwarves were evil beings created by Melkor.

Retrieved from "http://tolkiengateway.net/wiki/Dwarves"
Categories: Dwarves | Races | Characters in The Hobbit