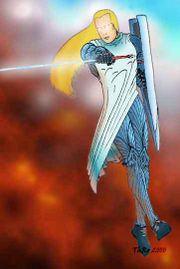 Eönwë (Q, pron. [eˈonwe]) was the banner-bearer and the herald of Manwë, and Chief of the Maiar along with Ilmarë. Eönwë was referred to as the "greatest of arms in Arda", meaning that he was the best with weapons, though not necessarily the most powerful.

In earlier conceptions of the legendarium, Eönwë, then called Fionwë ([fiˈonwe]), was envisioned as the son of Manwë, but as the concept of the Children of the Valar disappeared in the published Silmarillion; he was turned into Manwë's herald instead.