Fëanor was a prince of the Noldor, one of the Elven kindreds that departed Middle-earth to live with the Valar in Valinor. He had the greatest skill of any of the Noldor; he was a renowned craftsman, gem-smith, and warrior. Fëanor made the Silmarils, which was his most famous deed, and may also have wrought the palantíri. In addition, he invented the widely-used Tengwar script. Fëanor's passionate hatred of Morgoth and terrible oath led directly to the great triumphs and tragedies of the First Age.

Fëanor was the eldest son of Finwë, the High King of the Noldor, and his first wife Míriel Þerindë. He drew so much of Míriel's life energy when he was born that she grew weary of life, and departed to Lórien, where she voluntarily left her corporeal form, and died. Finwë remarried, and had two more sons, Fëanor's half-brothers Fingolfin and Finarfin, and two daughters, Findis and Irimë. Fëanor wedded Nerdanel, daughter of Mahtan, who bore him seven sons: Maedhros, Maglor, Celegorm, Caranthir, Curufin, Amrod and Amras.

At this time, Melkor, the mightiest of the Valar and source of evil, had deceived the Valar into thinking that he had repented of his evil ways. Pardoned and residing in Valinor, he undertook to corrupt the Noldor and succeeded in making them instruments of his malice, particularly Fëanor. But Fëanor greatly mistrusted Melkor, which was part of Melkor's plan.

In the greatest of his achievements, Fëanor captured the light of the Two Trees to make the three Silmarils, also called the Great Jewels. He prized the Silmarils above all else, and grew increasingly suspicious that the Valar and other Eldar coveted them. He either vainly displayed the jewels or jealously guarded them from all except his immediate family. 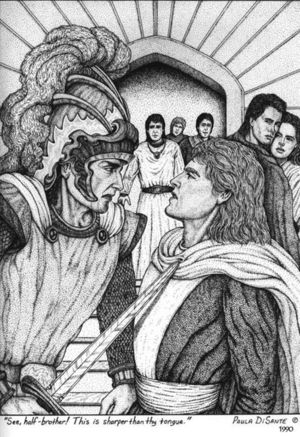 Melkor greatly desired the Silmarils and his hatred for Fëanor grew, but the Valar still did not know of Melkor's true intentions. Melkor played upon Fëanor's temperament and pride to convince him that his own half-brother Fingolfin was not only planning to usurp his place as heir to Finwë, but also seize the jewels for himself. Fëanor's hostility grew to the point to where he threatened Fingolfin's life. (It was at this time that the Noldor first began to forge weapons.) For this, the Valar exiled him to Formenos. He took a substantial treasure with him, including the Silmarils, which he put in a locked box. In a show of support for his eldest son, Finwë withdrew to Formenos.

The Valar realized that Melkor was behind Fëanor's actions. They sent Tulkas to imprison him again, but he could not be found. Melkor was not seen for a long time, until he unexpectedly showed up at Formenos. Since with Finwë and Fëanor's absence Fingolfin had become king, it seemed that Melkor's lies were true. Melkor tried again to convince Fëanor of them, but he erred, and Fëanor realized that Melkor's true goal was to obtain the Silmarils. He shut the door in Melkor's face. In a rage, Melkor left. When the Valar heard of the incident, they started the hunt up again. But it was apparent that Melkor had fled from Valinor. He feigned to go north, but then turned south.

After a time the Valar sought to mend the breach between Fëanor and Fingolfin, and invited them to Valinor to make peace. Fingolfin offered a hand to his half-brother, recognizing Fëanor's place as the eldest, which he grudgingly accepted.

Meanwhile, Melkor stole away to Avathar in the south of Aman to seek out the evil, spider-like creature Ungoliant. Ungoliant helped Morgoth destroy the Two Trees, bringing darkness to Valinor. Morgoth and Ungoliant then went to Formenos, slew Finwë, and took all the gems there, including the Silmarils. They escaped by crossing the Helcaraxë, or Grinding Ice, in the north to Beleriand in Middle-earth.

It was during the festivities where Fëanor and Fingolfin were being reconciled that the Trees were destroyed. The Valar knew that now the light of the Trees survived only in the Silmarils and Yavanna asked Fëanor to give them up so that they could restore the Trees. Fëanor emphatically stated that he would not give up his Silmarils of his own free will; if the Valar forced him, he said, they would be no better than Melkor. It was after this that the messenger came telling of the raid at Formenos.

According to the messenger, Melkor, surrounded by an impenetrable black fog, had come to Fëanor's vault in Formenos. Finwë the High King fought and lost against Melkor, and was the first elf to be slain in Valinor. Melkor ransacked the vault, taking many valuable jewels. Most notably, he was responsible for the thievery of the Silmarils.

The Return of the Noldor

The Valar and Eldar now fully understood the extent of Melkor's treachery. Fëanor, upon learning of his father's murder and the theft of his prized Silmarils, named Melkor "Morgoth", or "Black Enemy". Now King of the Noldor, Fëanor delivered the most impassioned speech ever given in Arda, which he unwittingly filled with Morgoth's taint. He railed against the Dark Lord, but because of Morgoth's influence, he also blamed the Valar for Morgoth's deeds. He persuaded most his people that because the Valar had abandoned them, the Noldor must follow him to Middle-earth and fight the Dark Lord. Fëanor then swore the terrible Oath of Fëanor which all seven of his sons also proclaimed, vowing to fight anyone and everyone—whether Elf, Man, Maia, or Vala—who withheld the Silmarils, and invoking even Ilúvatar as a witness. This became known as the Oath of Fëanor and later the cause for great tragedy among his seven sons.

Seeking a way to get to Middle-earth, he went to the shores of Aman, where the seafaring Teleri lived, and demanded the use of their ships. The Teleri refused, and in response, Fëanor and his armed and impassioned Noldor attacked the lightly-armed Teleri, destroyed their settlements and seized the ships. 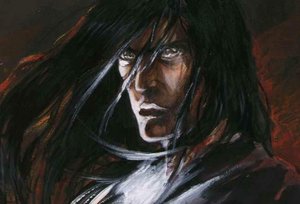 In repentance of this act, Finarfin, Finwë's third son, took his host and turned back. They were accepted by the Valar, and Finarfin ruled as High-King of the Noldor in Valinor.

There were not enough ships to carry all of the Noldor across the sea, so Fëanor and his sons led the first group. Upon arriving at Losgar, in the land of Lammoth, in the far west of Beleriand, where Morgoth and Ungoliant had passed not long before, they decided to burn the ships and leave the followers of Fingolfin behind. However, Fëanor accidentally left his son Amras in the ships, and he was burned aliveTemplate:Ref. The earth being flat in those days, the remaining Noldor saw the flames, and perceived that if they were to go to Middle-earth, they had no choice but to cross the Helcaraxë. This they did under the leadership of Fingolfin, and suffered great losses along the way, which greatly added to the animosity they had for Fëanor and his sons.

Learning of the Noldor's arrival, Morgoth summoned his armies from his fortress of Angband and attacked Fëanor's encampment in Mithrim. This battle was called the Dagor-nuin-Giliath ("Battle under the Stars"), for the Sun and Moon had not yet been made. The Noldor managed to win the battle and disperse Morgoth's armies. Fëanor, still in a great rage, pressed on toward Angband with his sons. He came even within sight of Angband, but was ambushed by a force of Balrogs, with few elves about him. He fought mightily, hewing even after receiving several wounds from Gothmog, Lord of Balrogs. His sons came upon the balrogs with great force of elves, and were able to drive them off. However, as Fëanor was being escorted off the battlefield, he knew his wounds were fatal. He cursed Angband thrice, but with the eyes of death, he knew that his elves, unaided, would never throw down the dark towers. At the moment of his death the passing of his fiery spirit reduced his body to ashes.

His sons were still bound by the Oath to recover the Silmarils, which would determine the events of Middle-earth during the First Age.

Template:Note The Peoples of Middle-earth, chapter XI (The Shibboleth of Fëanor), section "The names of the Sons of Fëanor"