Farmer Giles of Ham (written in 1947, published in 1949) is a short story written by J.R.R. Tolkien. The story describes a series of encounters between Farmer Giles and a wily dragon named Chrysophylax. It is set in a fantasy Britain of long ago, which has mythical creatures, medieval knights, and primitive firearms.

The book was originally illustrated by Pauline Baynes.

Farmer Giles was not a hero. He was fat and red-bearded and enjoyed a slow, comfortable life. One day a rather deaf and short-sighted giant blundered on to his land. Farmer Giles managed to scare him away with a blunderbuss shot in its general direction. The people of the village cheered: Farmer Giles was a hero. His reputation spread far and wide across the kingdom. Giles was rewarded by the King of the Middle Kingdom, with a sword named Caudimordax or "Tailbiter", a powerful weapon against dragons.

The giant, being also very short-witted, reported to its monstrous friends that there were no more knights, just stinging flies (actually scrap metal from Giles' blunderbuss), in the Middle Kingdom. This prompted a dragon, Chrysophylax Dives, to investigate the area — and everyone turns to the accidental hero Farmer Giles to deal with it.

The story makes light of the great dragon-slaying traditions. The knights who are supposed to do the job are useless fops more intent on "precedence and etiquette" than on noticing huge dragon footprints littering the landscape. "Giles" is also an interesting commentary on how people react to danger. Heroes aren't simply called for, they are demanded and hapless farmers can be forced to be heroes.

The Latin names and references imply that Giles is a Briton, a late generation remnant of the old empire after the decline of the western authority of the Romans. All the place-names are supposed to occur relatively close to Oxford, along the Thames or on the route from London to Oxford.

Among the jokes is a question put to "the four wise clerks of Oxenford"; Tolkien then quotes from the Oxford English Dictionary, on which he had worked. The phrase 'wise clerk of Oxenford' is also a reference to Chaucer's Clerk.

Tales from the Perilous Realm 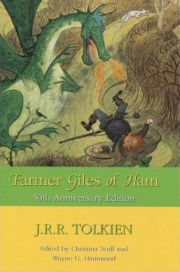 This special edition was published in 1999. The edition includes: