Fingolfin (S, pron. [fiŋˈɡolfin]) was a High King of the Noldor in Beleriand, eldest son of Finwë and Indis, younger brother of Findis, older brother of Írimë and Finarfin, and the younger half-brother of Fëanor. His wife was Anairë and his children were Fingon, Turgon, Aredhel, and Argon.

Fingolfin was the strongest and most valiant of the sons of Finwë. [2] Having different mothers, he and his older half-brother Fëanor never felt a close bond with each other. This lack of affinity developed into rivalry when Melkor secretly told each of them that the other was planning on driving them out of Tirion.

After King Finwë died, murdered by Morgoth, Fëanor rallied up the Noldor and gave a passionate speech. Nearly all of the Noldor followed him, along with his two half-brothers. Fingolfin led the largest host of the Ñoldor when they fled Aman for Middle-earth, even though he thought this unwise; he did not want to abandon his people to Fëanor. As days passed in their exile, more and more of the Noldor started speaking against Fëanor, for their journey was difficult, and they feared the prophecy of Mandos. After Fëanor's Noldor acquired the ships of the Teleri following the First Kinslaying, Fëanor and his followers used them to sail across the sea. Fëanor burned the ships after reaching Middle-earth, stranding the others, for he thought the followers of Fingolfin would prove to be useless.

Fingolfin and his people saw the smoke of the ships from afar, and chose to travel through the ice desert, for they were ashamed to go back to Valinor, and were angry at Fëanor. Fingolfin took them across the ice of the Helcaraxë, the journey was hard and many died, yet they were filled with hope when they saw the Moon for the first time. Soon after, at the rising of the Sun, he came to the Gates of Angband and smote upon them, but Morgoth stayed hidden inside. Fingolfin and the Noldor, realising they could not be victorious in this way, then came to the northern shores of Lake Mithrim, from which the Fëanorian part of the host had withdrawn.

Shortly after Fëanor's death, his oldest son Maedhros was captured by Morgoth. Learning this, Fingolfin's oldest son Fingon rescued Maedhros, with whom he was a good friend. Maedhros consequently waived his claim to kingship. Thus Fingolfin became High-King of the Noldor. He ruled from Hithlum, by the northern shores of Lake Mithrim.[5] 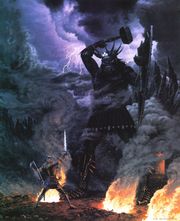 Ted Nasmith - Morgoth and the High King of Noldor

After defeating the Orcs in the Dagor Aglareb ("Glorious Battle"), Fingolfin maintained the Siege of Angband for nearly four hundred years. But the Siege was ended by the sudden assaults of Morgoth in the Dagor Bragollach ("Battle of Sudden Flame"), and many peoples of Beleriand fled. In the end Fingolfin rode to Angband alone to challenge Morgoth to single combat. Those who saw him thought Oromë himself had arrived; for a great madness of rage was upon him, so that his eyes shone like the eyes of the Valar. Fingolfin died there after a mighty duel, wounding Morgoth seven times with his sword Ringil, and struck one last punishing blow to Morgoth's foot before he broke the High King.[6] Morgoth's wounds never healed after that battle, and he limped everafter. Thorondor the King of Eagles then brought Fingolfin's body to a mountaintop overlooking Gondolin, and Turgon built a cairn over the remains of his father.

"In that vast shadow once of yore
Fingolfin stood: his shield he bore
with field of heaven’s blue and star
of crystal shining pale afar.
In overmastering wrath and hate
desperate he smote upon that gate,
the Gnomish king, there standing lone,
while endless fortresses of stone
engulfed the thin clear ringing keen
of silver horn and baldric green."
― Lay of Leithian, Canto XII, lines 3538-3547

Fingolfin's father-name was Ñolofinwë (Q: "Wise Finwë", pron. N [ˌŋoloˈfinwe], V [ˌŋoloˈɸinwe], T.A. Exilic [ˌnoloˈfinwe]). His mother-name was Aracáno[7] ("High Chieftain", pron. [ˌaraˈkaːno]). Fingolfin is the Sindarin form of his father-name, with the word Finwë added to the beginning. The addition was done by Fingolfin himself in pursuance of his claim to be High King of the Noldor after his father's death.[8]