"Of all the children of Finwë he is justly most renowned: for his valour was as a fire and yet as steadfast as the hills of stone; wise he was and skilled in voice and hand; truth and justice he loved and bore good will to all, both Elves and Men, hating Morgoth only; he sought not his own, neither power nor glory, and death was his reward."
― The Lost Road and Other Writings, "Quenta Silmarillion", §94

Fingon was a Noldorin prince, and later High King of the Noldor, noted for his skill in battle and was thus named "the Valiant" by his cousin Maedhros.

Fingon was the eldest son of Fingolfin and Anairë, and he was the older brother of Turgon, Aredhel, and Argon. Fingon led the largest host in the Flight of the Noldor from Aman to Middle-earth where he then ruled over Dor-lómin and Hithlum. He ruled the Noldor as High King from F.A. 456, following the death of his father in single combat with Morgoth. However, Fingon is mostly remembered for his friendship with Maedhros, who he rescued from the peaks of Thangorodrim, and for the manner of his death in battle with the Balrog Gothmog during the Nirnaeth Arnoediad. He was succeeded as High King by his brother Turgon, who ruled the Noldor from Gondolin.

Fingon was the eldest son of Fingolfin, son of King of the Noldor Finwë and his second wife Indis.[1] Fingon was born between 1190[2][note 3] and 1300[3][note 4] in the Years of the Trees, and whilst in Aman lived in Tirion, home of the Noldor in Valinor.[1]

In Y.T. 1495, Morgoth, with the help of Ungoliant, destroyed the Two Trees, stole the Silmarils from the fortress of Formenos and killed Finwë.[4] In anger, Fingon's uncle Fëanor made a speech in Tirion and, with his sons, made an oath to recover the Silmarils and lead the Noldor in a flight to Beleriand. Most love there was for Fingolfin's people, and although Fingolfin was reluctant to join the flight, he went out of love for Fingon who, with his brother Turgon, strongly supported Fëanor.[5]

During the flight of the Noldor, Fingon led the largest host and his people supported Fëanor in the First Kinslaying at Alqualondë. Once the host reached Araman in Y.T. 1496 there was great debate about how to reach Middle-earth. Fëanor's people secretly took all the Swan-ships and passed over the sea to land at Drengist; Maedhros - who was friendly with Fingon - wanted to send the ships back first to retrieve "Fingon the valiant" but Fëanor, to Maedhros's reluctance, burnt the ships at Losgar.[5] Fingon, with the rest of the Noldor of Fingolfin and his cousin Finrod, had to cross the dangerous grinding ice of Helcaraxë to much loss of life. They arrived in Middle-earth in Y.T. 1500, after Fëanor had been killed in the second battle of Beleriand, Dagor-nuin-Giliath.[6][7] 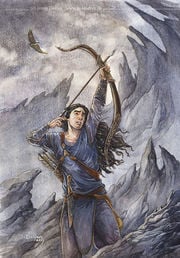 In F.A. 1, soon after their arrival in Middle-earth following the rising of the Sun and Moon, the host of Fingolfin were attacked in the Battle of the Lammoth. Although victorious in battle against the Orcs, Fingon's brother Argon was surrounded and killed.[8]

There was no great love between the Houses of Fingolfin and Fëanor following the latter's burning of the ships, causing the former to cross the Helcaraxë. Fingon resolved to rebuild the relationship between these two great houses of the Noldor, so in F.A. 5 went on a noble quest to Thangorodrim to rescue his cousin and friend Maedhros who had previously been captured by Morgoth. Travelling alone, and unseen in the darkness, Fingon climbed across the cracks and crevices of Thangorodrim but could not find Maedhros; eventually he took out his harp and sang. Finally, he could hear the distant voice of Maedhros singing in answer, but could not climb up to him. Maedhros begged Fingon to shoot him with his bow, but as Fingon cried to Manwë to "speed now this feathered shaft", the great eagle Thorondor swooped down and lifted Fingon up. Fingon could not break Maedhros's chains - being of evil design by Morgoth - and although Maedhros begged Fingon to kill him, Fingon cut Maedhros's hand off at the wrist to free him. Borne back to Hithlum by Thorondor, Fingon's deed was praised as one of the most mighty amongst the Noldor. The hurt between the two houses was healed, and Maedhros waived the High Kingship of the Noldor which then passed to Fingolfin.[9]

Fingolfin's people made their home in Hithlum, mostly around Lake Mithrim, and built the fortress of Barad Eithel to keep watch; in F.A. 7, at Maedhros's suggestion, Fëanor's sons moved to East Beleriand.[10] The region of Nevrast was taken by Fingon's brother Turgon (until he moved to Gondolin), whilst the south-western region of Hithlum, Dor-lómin, was given to Fingon to rule over.[9]

Following the great victory of the Noldor in the Dagor Aglareb, the Glorious Battle, Fingon lived in a watchful peace known as the Siege of Angband.[7] In F.A. 155, Morgoth sent a force of along the coast to Drengist to attack Hithlum from the west. Having been seen by the Noldor, Fingon heavily defeated the Orcs, causing Morgoth to realize that orcs alone were no match for the Elves.[11] Over a hundred years later in F.A. 260, the great dragon Glaurung came forth from Angband to attack the Elves;[12] although a new breed of fire-drake, Glaurung was still relatively young and only half-grown. The Elves fled to Ered Wethrin and Dorthonion as Glaurung defiled the Ard-galen, but Fingon led a troop of archers on horseback to attack Glaurung. He could not withstand their arrows and fled, and for the next 200 years the peoples of Beleriand enjoyed the Long Peace and grew prosperous.[7] In F.A. 416, Fingolfin granted Dor-lómin to the House of Hador, the third house of the Edain, and Fingon presented Hador with a Dragon-helm which eventually passed to Túrin.[13][14]

In winter F.A. 455, rivers of fire suddenly sprang forth from Angband, turning the Ard-galen into the Anfauglith. This began the Dagor Bragollach, the Battle of Sudden Flame.[15] The dragon Glaurung, now fully grown, led armies of Balrogs and Orcs in battle that resulted in the deaths of many Elves and Men. The remaining forces of the Noldor were scattered following this heavy defeat. Perceiving the ruin of the Noldor, Fingon's father Fingolfin challenged Morgoth to single combat. Fingolfin fought valiantly, and although he died in the battle, Morgoth himself was wounded and never again fought in single combat. Fingon thenbecame High King of the Noldor.[15][9]

Seven years later, in F.A. 462, Morgoth sent a force of Orcs to attack Fingon's people in Hithlum. Galdor, son of Hador, died defending Eithel Sirion and his son Húrin took up the lordship of Dor-lómin and served Fingon thereafter. To the west, battle took place in Hithlum, and Fingon would have succumbed had it not been for a force of Falathrim elves under the command of Círdan who sailed up the Firth of Drengist and helped defeat the Orcs.[15] 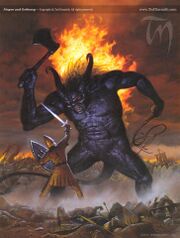 Fingon and Gothmog by Ted Nasmith

Following the success of Beren and Lúthien in the Quest for the Silmaril, Maedhros saw that Morgoth was not unassailable and was emboldened to form the Union of Maedhros of Elves, Men and Dwarves. Maedhros would attack from the east and Fingon from the west. They planned to trap Morgoth between the two armies.[16] Unlooked for, Fingon's brother Turgon unleashed a force of ten thousand Elves from Gondolin. On seeing this, Fingon cried:

'Utúlie'n aurë! Aiya Eldalië ar Atanatári, utúlie'n aurë! The day has come! Behold, people of the Eldar and Fathers of Men, the day has come!' And all those who heard his great voice echo in the hills answered crying: 'Auta i lómë! The night is passing!'
—Quenta Silmarillion, "Of the Fifth Battle"

However, Maedhros' army had been delayed following the betrayal of Uldor. Morgoth therefore sent his Orcs swiftly over the Anfauglith to taunt Fingon and draw out his forces. They held firm until the Orcs brought forth Gelmir and cut off his legs, arms and head before them. Gwindor, Gelmir's brother, was enraged by this; and he, with Fingon, led the charge. They reached the doors of Angband but all the Elves of Nargothrond were slain save Gwindor, who was taken captive.[16]

On the fourth day, Fingon retreated and met his brother Turgon on the plains of Anfauglith. Some hours later, the banners of Maedhros appeared on the battlefield and the Elves were heartened, believing victory was in their grasp. However, Morgoth then unleashed wolves, dragons and Balrogs led by Glaurung, who separated the hosts of Fingon and Turgon from Maedhros. This battle, the Nirnaeth Arnoediad, The Battle of Unnumbered Tears, was the most grievous for the Elves. Fingon, with a host of Men from Dor-lómin led by Húrin, was surrounded. Eventually, being pushed back, Fingon fought Gothmog, lord of Balrogs in battle, but was killed by Gothmog's black axe after another Balrog bound him with a whip. This brought an end to Fingon's realm in Hithlum, and his brother Turgon became High King of the Noldor,[16] whilst Húrin was captured and tortured personally by Morgoth.[14]

Fingon includes the element fin meaning "hair" or "golden hair".[17] The name is the Sindarized version of his Quenya father-name, Findekáno which consists of findë "hair" and káno "commander", "ruler", "chieftain";[18][19][20] however, in the original "Etymologies" it was suggested find meant "skill".[21]

Christopher Tolkien observed that in the very earliest versions of the legendarium, there is no mention of Fingon (or Fingolfin, Finarfin or Finrod)[22][23] However, when he first appears in "The Lay of the Children of Húrin" in the 1920s he is named Finweg[24] (and on one occasion Fingweg),[25] a name he retains in the "The Quenta" of the early 1930s even though his story closely matches that of the published Silmarillion. A more significant difference is that originally Fingon spoke against Fëanor at Tirion,[26] whilst in the later 1951 version of Quenta Silmarllion, Fingon and Turgon did not take part in the Kinslaying at Alqualondë.[27]

Fingon is renamed from Finweg the 1930s around the time of the Annals of Beleriand,[28] and was firmly Fingon by the time Tolkien reworked the Quenta Silmarillion in 1937-8.[29] In an Old English version of the Quenta Noldorinwa, Fingon's name is given as Finbrand.[30]

In the published The Silmarillion, Fingon was the father of Gil-galad, which was a brief idea that Tolkien had, but this inclusion was an editorial decision by Christopher Tolkien who admitted it would have been better had his parentage remained obscure and that Gil-galad being the son of Orodreth was Tolkien's "last word on the subject".[31][32]