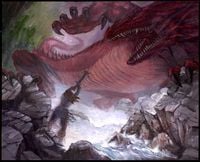 The Slaying of Glaurung by Guy Gondron
Glaurung was called the Father of Dragons. It is not known with certainty, but it is largely suspected that he sired the rest of his race (or at least of his own sub-species, the Urulóki: wingless firebreathing dragons). He was bred by Morgoth from some unknown stock and was the first dragon to appear outside of Angband. This first appearance occurred during the Siege of Angband, when he came forth to attack. This battle is called the Dagor Bragollach (Battle of Sudden Flame) because of the fire he unleashed at his enemies, destroying the land of Ard-Galen in a river of flames (This is the reason that this land was renamed to Anfauglith, land of ashes. But Morgoth wasn't pleased because he showed himself too early when he was still young and immature. He was defeated and driven back to Angband by mounted Elven archers led by Fingon son of Fingolfin.