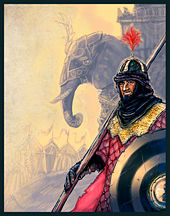 Harad's location in the far south isolated it to a certain extent from the rest of Middle-earth. The climate was much warmer and sunnier (Harad was called the "Sunlands" by the Hobbits of the Shire). There were unusual animals such as the Oliphaunts.[10] Even the constellations in Harad's night sky down in the southern hemisphere were different from those in northern Middle-earth (Aragorn had travelled far into Harad "where the stars are strange"[11]). 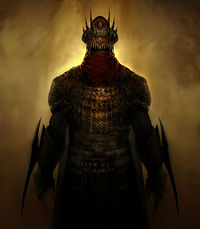 Harad's tribes were divided—at least in the minds of the men of north-western Middle-earth—into those of Near and Far Harad, although there were many tribes of the Haradrim, often mutually hostile. The men of Near Harad were brown-skinned, with black hair and dark eyes,[10] while the race known as "half-trolls" out of Far Harad had black skin.[12] It is also presumed that every tribe had a chieftain, who served as their leader and general in the battlefield.