Helm's Deep was a large valley in the north-western Ered Nimrais (White Mountains) below the Thrihyrne. 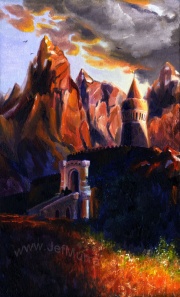 The valley was blocked over its entire width by the trench and rampart called Helm's Dike and behind that lay the fortress called by Men the Hornburg, at the entrance to the Glittering Caves.

Originally the valley was home to a small Gondorian regiment, but after Calenardhon became Rohan it became an encampment of the Rohirrim, where the guards of the Fords of Isen lived.

During the war with the Dunlendings under Wulf, the Rohirrim under King Helm Hammerhand and many of his people sought refuge in the keep, where they held out during the winter of Third Age 2758 and 2759.

A long causeway wound up to the great gate of the fortress itself. Inside the keep there were stables and an armoury, as well as a great hall in the rear which was dug out of the mountainside. There also was a great tower the top of which consisted of the great horn of Helm Hammerhand. The Deep which stood next to the fortress was barred by the long Deeping Wall, which consisted of solid rock except for a small culvert which allowed water from the Deeping Stream to enter; this rendered a fresh supply in sieges of great length. Access to the fortress from within the Deep was made possible by a long stair which led to the Hornburg's rear gate.

During the War of the Ring the fortress guarding Helm's Deep again became the refuge of some of the Rohirrim, now under King Théoden, and the Battle of the Hornburg was fought there.