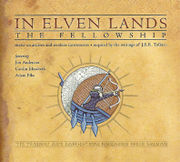 Track Listing of the First Edition