Before the quest to Erebor, Fili and Kili probably lived in the Blue Mountains where their uncle resided after the disappearance of Thráin II.[1] As Thorin's sister-sons, they accompanied their uncle when he set out to challenge the dragon Smaug.

Up in the Misty Mountains during the thunder-battle the two brothers, being the youngest Dwarves with the keenest eyes, were sent ahead to look for shelter. They found a small dry cave which was perfect for the company (until the Gobins arrived). After Gandalf had rescued the company and was counting the members he found Kíli and Fíli, as usual, paired together.[2] 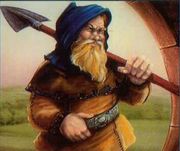 Younger brother to Fili, Kili is a loyal nephew to Thorin Oakenshield. Carefree and somewhat reckless, Kili has led a charmed and untroubled life to this point. Handsome and physically able, Kili possesses the invincible courage of youth. He is a skilled fighter and expert archer, having been trained with weapons from an early age. As one of the youngest in The Company of Dwarves. Kili is determined to make his mark and prove his worth.
—Warner Bros.[17]

Because Ori was made the youngest of the 13 Dwarves in the Hobbit films, Kíli is presumably the second youngest. He also comes to have an infatuation with Mirkwood Elf Tauriel (a character made up exclusively for the films). When struck with a poisoned arrow by Bolg during the Company's escape from the Wood-elves' custody via wine barrels, it is she who ultimately heals him with Athelas. Due to said injury, Thorin did not allow him to journey with the others up to the Lonely Mounatin from Lake-town. Óin and Fíli then both opted to also stay behind in order to look after him.