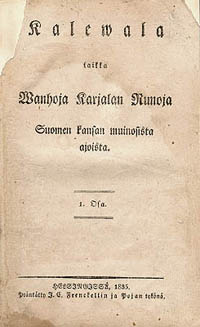 The Kalevala is a book and epic poem which Elias Lönnrot compiled from Finnish and Karelian folklore in the 19th century. It is held to be the national epic of Finland and is traditionally thought of as one of the most significant works of Finnish literature.

"Kalevala" is the name of the homeland of the heroes in the book Kalevala.

Tolkien and the Kalevala

The Finnish mythology, as presented in the Kalevala, had a profound impact on the young J.R.R. Tolkien, and became an inspiration for the creation of his Legendarium. In an early letter to Edith Bratt, Tolkien mentions that he is doing a reworking of one of the stories from the Kalevala (resulting in the manuscript "The Story of Kullervo").[1] In 1955, writing to his friend W.H. Auden, he says that "the beginning of the legendarium [...] was in an attempt to reorganize some of the Kalevala, especially the tale of Kullervo the hapless, into a form of my own".[2] 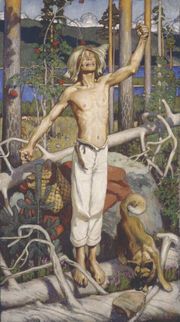 "The germ of my attempt to write legends of my own to fit my private languages was the tragic tale of the hapless Kullervo in the Finnish Kalevala. It remains a major matter in the legends of the First Age (which I hope to publish as The Silmarillion)"
― J.R.R. Tolkien, Letter 257

A considerable part of the tale of Túrin Turambar is derived from the Kalevala, where the counterpart of Túrin is Kullervo, son of Kalervo.[3] Kalervo comes into conflict with the kin of Untamo, and soon a gang of men attacks Kalervo killing his family and men, and only one maid is spared her life to serve as a slave for Untamo. But soon the maid gives birth to Kullervo. Later Kullervo is sold to Ilmarinen, from who he soon escapes. Kullervo finds out that her parents are alive as well, and hears from them that his sister has disappeared. Kalervo has to go to pay the families taxes, and on his way back Kullervo meets a fair maiden and seduces her. Afterwards she realizes that Kullervo is her brother, and out of shame she jumps into rapids and drowns. Desperate and self destructive Kullervo returns home and attacks Untamo and slays him. After the killing he talks to his sword, and says that it has bled a lot of innocent blood, and tells it that now the sword can bleed some guilty blood as well. The sword replies:

Thus his trusty sword makes answer,
Well divining his intentions:
'Why should I not drink thy life-blood,
Blood of guilty Kullerwoinen,
Since I feast upon the worthy,
Drink the life-blood of the righteous?'
—Canto XXXVI, vv.302-309

After the sword replies, Kullervo thrusts himself to the blade and dies.