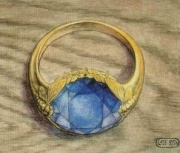 "Lesser Ring", as portrayed by Larry Forcella for MECCG

The lesser rings were forged by the elves as essays in the craft of ring making. These rings were made sometime between S.A. 1200, when Sauron came in disguise to Eregion, and 1500, when they began crafting the greater Rings of Power.[1]