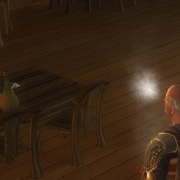 In The Lord of the Rings Online, the smoke from Longbottom Leaf takes the form of a horizontal smoke ring that appears behind the character's head. This effect appears to be broken or bugged. From the front, only the default cloud of thick smoke can be seen.