The Master of Lake-town was the elected leader of Esgaroth at the time of the quest for Erebor in T.A. 2941.

Nothing is known about the Master's history prior to the arrival of Thorin and Company in T.A. 2941. Indeed, even his individual name is unknown. Nonetheless, as the elected Master of Lake-town, he would have been accounted amongst the old and wise of the town.[1]

Henning Janssen - Master above the Lake

When the Dwarves and Bilbo reached Lake-town, they were taken to the great hall where the Master was feasting. Subsequently, Thorin declared the return of the King under the Mountain. This news spread quickly throughout the town and the people began to shout, sing, and rejoice. The Master doubted that there ever was a 'King under the Mountain' but he had to take heed of the clamour. Therefore he pretended to believe Thorin's story and the Master yielded his own great chair to him. The Master accommodated the Dwarves and Bilbo for two weeks before they thought about departing for the Lonely Mountain. The Master was shocked that Thorin would dare to approach Smaug and he wondered whether he really was who he said he was. All the same, he was more than willing to let them go because they were expensive to keep and their arrival had caused business to come to a standstill.[2]

When Smaug attacked Lake-town, the people urged the Master to tell them what needed to be done. But as the flames leaped from the dragon's jaw, the Master fled in his guided boat. Thus it was that Bard took control of the situation and ultimately slew the dragon himself. The surviving townsfolk gathered on the western shore of the Long Lake and lamented at the loss of their home. The people then directed their anger at the Master, accusing him of selfishness and calling him 'Moneybags'. They demanded that Bard become their king. In response, the Master, in a demonstration of his charisma and oratorical prowess, rebutted the people and convinced them that their anger should be directed towards Thorin and Company instead of him. The Master remained quiet as the survivors set up camps along the shore and Bard assumed effective control of all the people, but did so only in the Master's name. When the hosts of Esgaroth and the Elvenking set off for Erebor to demand their share in the treasure, the Master did not go. Those who stayed behind began to prepare for the oncoming winter by building huts and collecting resources; meanwhile, the Master directed the process of planning a new town.[1]

After the Battle of Five Armies, Bard gave a significant amount of gold to the Master, who in turn rewarded his followers and friends.[3] However, he met a sad end. He caught the 'dragon-sickness', and he fled with his gold into the Waste. Here he was abandoned by his companions before dying of starvation. The new Master was said to be much wiser and popular, and the source of prosperity up and down the River Running.[4] 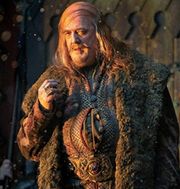 The Master of Lake-town in The Hobbit (film series)

The Master of Lake-town was played by Stephen Fry.[5] He is an incredibly corrupt, vain, and slovenly individual. Also becoming paranoid that the people of Lake-town may try to overthrow him, he uses his chief aide Alfrid to keep him abreast of the goings-on throughout the town. He sees Bard as the biggest threat to his power, and, knowing Bard is the descendent of Girion, the last lord of Dale, he uses every chance he can to exploit the fact that Girion was unable to bring down Smaug during the Dragon's destruction of Dale. When Thorin and Company arrive in the town, and Thorin promises the townspeople a share of their treasure if they succeed in taking back Erebor from Smaug, the Master seizes this opportunity to approve of the Dwarves' quest in hopes of getting back into the townspeople's good graces. He gives the Company a hero's sendoff the following day. Later, he orders captain of the guard Braga to arrest and imprison Bard on any charge he chooses. When Smaug is in the process of destroying Lake-town, the Master, Alfrid, Braga, and a few other town guards attempt to make off with the town's treasury in a boat and let the others fend for themselves. To get the boat to go faster, the Master eventually pushes Alfrid overboard. After Smaug has been shot by Bard's Black Arrow, the Dragon falls directly onto the Master's boat while plunging to his death into Long Lake, presumably taking everyone aboard with him.

The Master of Esgaroth is played by John Bryning.[6]

The Master of Lake-town is played by Heinz Theo Branding.

The Master is named Calamar, and secretly in league with goblins and ruffians.[7]

The Master does not make a physical appearance, but his name is revealed to be Othur in a Lake-town quest dialogue.