Menegroth, the Thousand Caves, was the city in the land of Doriath which was home to king Thingol of the Sindarin elves and queen Melian, one of the Maiar, during the First Age.

After the First Battle of Beleriand, many Elves who had not lived in the cities fled to Doriath, which was afterwards protected by the Girdle of Melian.[3]

Years of the Sun

Menegroth and Doriath enjoyed peace for a long time. Thingol preferred a policy of isolationism and not to mingle in the affairs of the Noldor, the War of the Jewels and the conflict with Morgoth in general. No host of Doriath participated in any of the great battles, except the First. Only with his kin in Nargothrond did Thingol remain in contact.[4][5] 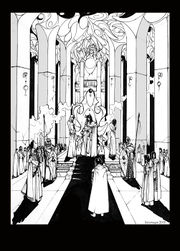 Yet Menegroth also became entangled in the fate of the Silmaril and thus the Oath of Fëanor and the Doom of Mandos. When the man Beren asked for the hand of Thingol's daughter Lúthien in marriage, Thingol was affronted, thinking little of mortal men. As a bride price he demanded that Beren should bring one of the Silmarils from Morgoth's iron crown.[6]

With the help of Lúthien, Beren succeeded, but the price was high: Carcharoth, the wolf who was guarding the Gates of Angband, bit off the hand in which Beren was holding the Silmaril. Driven mad by the pain that the hallowed stone caused to him, searing his intestines, Carcharoth ravaged Beleriand and finally broke through Melian's Girdle, threatening Menegroth. He was confronted somewhat to the north-east from the city at the banks of Esgalduin and killed by Huan the Great Hound of Valinor, having wounded Beren mortally. The Silmaril was found in his stomach and thus found its way to Menegroth.[6]

The Sack of Doriath

Years later, Húrin Thalion brought as a gift, though his heart was bitter, the famed dwarf necklace Nauglamír to Thingol. Thingol then had become enchanted by the beauty of the Silmaril and in his mind made up a plan, to set the Silmaril into the Nauglamír. It happened that at this time a troop of Dwarves from Nogrod were in Menegroth. Thingol offered a high price to them if they managed to set the stone into the Nauglamír. But seeing the unrivalled jewel and the necklace a great desire and greed came upon them to possess both. When they had finished their work they claimed the treasure; Thingol was slain by them and they fled from Menegroth.[7]

News of the event spread fast and the Dwarves were hunted and slain. Two of them escaped and told a crooked tale about how they were betrayed and their brethren slaughtered by the Elves. The Dwarves of Nogrod rose in anger and mustered a great army. Doriath lay open to their onslaught; the Girdle was gone since Melian, in deep sorrow for her husband's death, had left Middle-earth.[7] 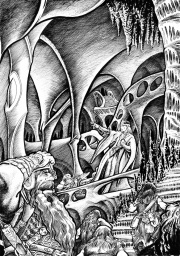 The Dwarves invaded Doriath and found little resistance as the captains of the Sindar were indecisive and despaired, and attacked Menegroth. Many Dwarves and Elves fought in the Battle of the Thousand Caves and many were slain. Mablung, captain of the guard, was slain at the doors of the treasure chamber where the Nauglamír was stored. This terrible event then led to the distrust that thereafter remained between Elves and Dwarves. However, on their way back, the Dwarves were waylaid at Sarn Athrad by the Laiquendi led by Beren and their king was slain by Beren in single combat. The remainder of their host was destroyed by Ents.[7]

The Second Kinslaying and the End of Menegroth

The Nauglamír with the Silmaril was thereafter worn by Lúthien at Tol Galen in Ossiriand. Although weakened, the Kingdom of Doriath continued for Dior Eluchíl son of Lúthien and Beren took up the crown. However, after the death of Lúthien and Beren the Nauglamír was returned to Doriath. The Oath of Fëanor stirred again and the Sons of Fëanor stated their claim on the Silmaril. Dior refused to hand over the stone for which his parents had endured so much. Celegorm instigated his brothers and in the midst of winter their hosts deployed at the gates of Menegroth and for a second time Elves were slain by Elves.[7]

Dior and his wife were slain, and of the seven Sons of Fëanor only four survived the battle. Dior's sons, Eluréd and Elurín, were abandoned in the forest to die, but his daughter Elwing fled to the havens at the Mouths of Sirion, bearing the Silmaril with her. The realm of Menegroth did not endure this second slaughtering and did not rise again.[7]

Menegroth was a wholly underground city accessed only through a stone bridge over Esgalduin. While the Dwarves did the major work, the Elves also participated in the construction: the pillars imitated beeches with branches and leaves, the halls were lit by golden lanterns and there were silver fountains, and many figurines of animals. It is told that nightingales and other birds lived within the caves. Thus Thingol had the most beautiful palace a king ever had owned east of the Sea.[3]

...through corridors of carven dread
whose turns were lit by lanterns hung
or flames from torches that were flung
on dragons hewn in the cold stone
with jewelled eyes and teeth of bone.
Then sudden, deep beneath the earth
the silences with silver mirth
were shaken and the rocks were ringing,
the birds of Melian were singing;
and wide the ways of shadow spread
as into arched halls she led
Beren in wonder. There a light
like day immortal and like night
of stars unclouded, shone and gleamed.
A vault of topless trees it seemed,
whose trunks of carven stone there stood
like towers of an enchanted wood
in magic fast for ever bound,
bearing a roof whose branches wound
in endless tracery of green
lit by some leaf-imprisoned sheen
of moon and sun, and wrought of gems,
and each leaf hung on golden stems.
Lo! there amid immortal flowers
the nightingales in shining bowers
sang o’er the head of Melian,
while water for ever dripped and ran
from fountains in the rocky floor.
There Thingol sat. His crown he wore
of green and silver, and round his chair
a host in gleaming armor fair...
—Lay of Leithian, Canto IV, vv.981-1011

Menegroth means "Thousand Caves" and is analyzed as meneg ("thousand") and groth ("excavation").[8]

In the earlier Etymologies, Tolkien explains the word is of Doriathrin language and gives the final element as Doriathrin roth.[9]

According to C. Hostetter, Menegrond found in the Tolkien typescript texts, may be a Sindarin form of the Doriathrin classical form Menegroth[10].