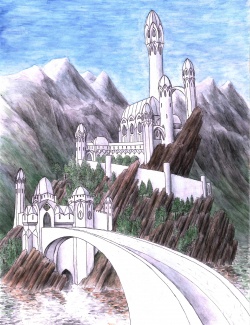 Minas Tirith was the tower on the island of Tol Sirion that guarded the Pass of Sirion.

Minas Tirith was built around F.A. 60[1] by Finrod Felagund to prevent the forces of Morgoth from invading Beleriand from the plains of Ard-galen. After Finrod built Nargothrond he handed over control of the watchtower to his nephew, Orodreth.[2]

In F.A. 457 Sauron captured Minas Tirith in the aftermath of the Dagor Bragollach and Orodreth fled south. The island was then called Tol-in-Gaurhoth, the "Isle of Werewolves".[3]

Although the Noldor regained control of the Pass of Sirion until the Nirnaeth Arnoediad ("Battle of Unnumbered Tears"), they did not attempt to rebuild the tower.