The Misty Mountains or Mountains of Mist (Hithaeglir in Sindarin1) was a great mountain range that lay between Eriador in the west and the Great River Anduin in the east. They ran 795 miles (1,280 kilometers) from Mount Gundabad in the far north to Methedras in the south. Some of the peaks may have been as high as 12,000 feet (3,660 meters)2.

The northernmost peak of the Misty Mountains was Mount Gundabad, where according to legend Durin, eldest of the Seven Fathers of the Dwarves awoke. Later it became a haven for Orcs.

The greatest Dwarven realm in Middle-Earth, Khazad-dûm, was located at the midpoint of the Misty Mountains. The city was built under three peaks, Redhorn (Caradhras in Sindarin), Silvertine (Celebdil), and Cloudyhead (Fanuidhol). Inside Silvertine the Dwarves built the Endless Stair, a stairway from the foundations of the mountain to its peak. The southernmost mountain was Methedras (Sindarin for "Last Peak").

Passes over the Misty Mountains

The most important passes were the High Pass and the Redhorn Pass. There was also a pass at the source of the Gladden River.

Routes around the Misty Mountains 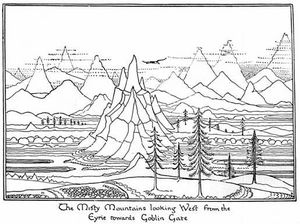 The Misty Mountains looking West from the Eyrie towards Goblin Gate by J.R.R. Tolkien

The Misty Mountains were created by the Vala Melkor during the Years of the Trees as a hindrance for Oromë, who would hunt his fell creatures. They would later serve as a deterrent for the Elves during the Great Journey, causing some to turn south. The Elves that would not cross the Misty Mountains would become the Nandor.

Dwarves, Orcs, Elves, Men, Hobbits, Eagles, and Ents all lived beneath or alongside the Misty Mountains.

The great Dwarven city of Khazad-dûm (later called the "Black Pit" of Moria) was located near the middle of the mountain chain. There Durin's folk lived for thousands of years with a kingdom which spread as far as Gundabad. Until the awakening of Durin's Bane, which drove the Dwarves from their city. It also seems that some Dwarves either before or after the War of the Dwarves and Orcs, dwelt on the eastern side of the mountains near Goblin-town.

When the Dwarves were strong, the mountains were generally free of Orcs. But when the Shadow was strong, Orcs bred in Mount Gundabad, in Goblin-town (where Bilbo found the One Ring), later in Moria itself, and everywhere in between.

The Elven enclave of Rivendell, the home of Elrond, was built in the western foothills beneath High Pass. On the eastern side of the mountains, near the source of the Silverlode river, lay the Kingdom of Lorien under the rule of Lord Celeborn and Lady Galadriel. While Elves guarded both sides of the Misty Mountains, few ever crossed them.

In the Third Age the Witch-king built the Kingdom of Angmar in the western lands between the Misty Mountains and the Mountains of Angmar. The evil country was peopled by fallen Men, Orcs, and other creatures of Sauron. Its capital was Carn Dûm. The land east of the Misty Mountains and south of the Grey Mountains, was the ancestral home of the Éothéod, the forefathers of the Rohirrim. Their capital was Framsburg. At the southern tip of Misty Mountains, beneath Methedras was Isengard, which was originally a Gondorian fortress but was later given to Saruman. In the Third Age the south lands were protected by Rohan.

Hobbits lived for untold years along the foothills of the Misty Mountains near the Vales of Anduin. Around Third Age 1050, the Hobbit group known as the Harfoots migrated west across the Misty Mountains, fleeing the ever more numerous Men and the Shadow growing in Mirkwood. Later the other two groups of Hobbits, the Stoors and Fallohides, migrated east as well, until by 2500 no Hobbits could be found east of the mountains.

Near the east exit of Goblin-town was the Eagles kept an eyrie to keep watch on the Orcs. Much further south, Ents guarded Fangorn Forest, the last remnant of the great Southern Forest that surrounded the Misty Mountains eons ago.

In the Third Age

Thorin and Company, along with Gandalf and Bilbo Baggins, used the High Pass to cross the Misty Mountains, and were captured by the Orcs of Goblin-town (as related in The Hobbit).

Later the Fellowship of the Ring tried to cross Redhorn Pass, after choosing not to use the High Pass or the Gap of Rohan because of the threat of Orcs patrols or Saruman's forces. A powerful blizzard blocked the Redhorn Pass, forcing the Fellowship to journey through Moria. There they faced the Balrog that ruled the mines. Gandalf slew the Balrog by throwing it from the Silvertine, but sacrificied his own life in doing so.

"Misty Mountains" Outside of Tolkien