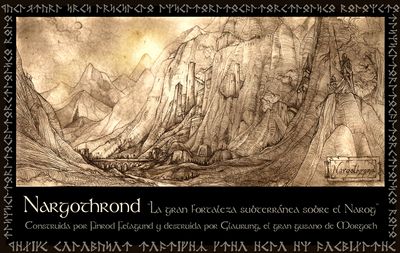 Nargothrond by Felix Sotomayor
Nargothrond ("The great underground fortress on the river Narog") is the stronghold built by Finrod Felagund, delved into the banks of the river Narog in Beleriand, and the lands to the north (the Talath Dirnen or Guarded Plain) ruled by the city.

Inspired by Menegroth in Doriath, and seeking a hidden place from which to be safe from the forces of Morgoth, Finrod established it in the early years of the First Age, in the Caverns of Narog beneath the forested hills of Taur-en-Faroth on the western bank of Narog. He was aided by the Dwarves of the Ered Luin, who also made for him the Nauglamír, the Necklace of the Dwarves.

However, Finrod was not the first to delve in those caves: it had first been inhabited by the Petty-dwarves before they were driven out.

Originally it could only be reached by a narrow path along the banks of the river, but later a bridge was built across Narog.

Finrod ruled Nargothrond until he joined Beren in his quest for the Silmaril and gave it to Orodreth. However, the sons of Fëanor, Celegorm and Curufin lived in Nargothrond at this time and were more powerful than Orodreth until Finrod's death was reported, at which time they were exiled.

Túrin Turambar later came to Nargothrond and became one of its chief fighters, but he also persuaded the people to fight openly against Morgoth (the bridge was built at this time), which eventually led to its sack by the army of the dragon Glaurung.