" 'They come from Mordor,' said Strider in a low voice. 'From Mordor, Barliman, if that means anything to you.' "
― The Fellowship of the Ring, Strider

The Nazgûl (Black Speech: Ringwraiths, sometimes written Ring-wraiths), also known as the Nine Riders or Black Riders (or simply the Nine), are evil servants of Sauron in Middle-earth. The rarely used Quenya name for them is Úlairi. The book refers to the Nazgûl as "his [Sauron's] most terrible servants."

The nine Nazgûl arose as Sauron's most powerful servants in the Second Age of Middle-earth. It is said that three of the Nine were lords of Númenor corrupted by Sauron. They were all powerful mortal Men to whom Sauron gave nine Rings of Power. These proved to be their undoing:

"Those who used the Nine Rings became mighty in their day, kings, sorcerers, and warriors of old. They obtained glory and great wealth, yet it turned to their undoing. They had, as it seemed, unending life, yet life became unendurable to them. They could walk, if they would, unseen by all eyes in this world beneath the sun, and they could see things in worlds invisible to mortal men; but too often they beheld only the phantoms and delusions of Sauron. And one by one, sooner or later, according to their native strength and to the good or evil of their wills in the beginning, they fell under the thralldom of the ring that they bore and of the domination of the One which was Sauron's. And they became forever invisible save to him that wore the Ruling Ring, and they entered into the realm of shadows. The Nazgûl were they, the Ringwraiths, the Enemy's most terrible servants; darkness went with them, and they cried with the voices of death."
― The Silmarillion, "Of the Rings of Power and the Third Age"

For many years the bearers used the rings to gain great wealth, prestige and power. The corrupting effect of the rings caused their bodily forms to fade over time until they had become wraiths entirely. Given form only through the attire of black cloaks and hauberks of silver mail, their original form was completely gone and invisible to mortal eyes. Their hypnotic eyes could be plainly distinguished from their dark clothing, and in a rage they appeared in a hellish fire. Untouchable to mortal men (unless blessed by weapons or tools of the ancient Elves of the First Age or by the Dunedain, such as the barrow-blade used by Merry on the Witch-king of Angmar), they had many weapons, which included long swords of steel and flame, daggers with venomous properties, and black maces of great strength.

Their arsenal of deadly armaments was not confined to physical means; they also had seemingly magical weapons of devastating power. They were surrounded by an aura of terror, which affected all living creatures; their "breath" (called the Black Breath) was poisonous, and their cries caused terror and despair in all who heard them. Some of the Nazgûl appear to have been accomplished sorcerers and used magic to devastating effect. According to Tolkien, though, it was the fear they inspired that was the chief danger:

"They have no great physical power against the fearless," he wrote, "but what they have, and the fear that they inspire, is enormously increased in darkness"
― The Letters of J.R.R. Tolkien

The Nazgûl first appeared around 2251 of the Second Age and were soon established as Sauron's principal servants. They were dispersed after the first overthrow of Sauron in 3441 at the hands of the Last Alliance of Elves and Men, but their survival was nonetheless assured while the One Ring persisted. They re-emerged around 1300 of the Third Age, when the Lord of the Nazgûl, the Witch-king of Angmar, led Sauron's forces against the human kingdom of Arnor. He was eventually defeated in battle in 1975 and returned to Mordor, gathering the other Nazgûl in preparation for the return of Sauron to that realm. In 2000, they besieged Minas Ithil and captured it after a two-year siege. The city thereafter became the stronghold of the Nazgûl, from where they directed the rebuilding of Sauron's armies, also acquiring a palantír for the Dark Lord.

In 2942 Sauron returned to Mordor and declared himself openly in 2951. Two or three of the Nazgûl were sent to his fortress at Dol Guldur to garrison that outpost.

In 3017, near the beginning of the story told in The Lord of the Rings, Sauron commanded the Ringwraiths to recover the One Ring of Power from "Baggins of the Shire". Disguised as horse riders clad in black (hence the term Black Riders), they sought out Bilbo Baggins who, as Gollum had revealed, had the One Ring in his possession. 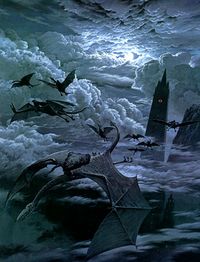 The Nazgûl by Ted Nasmith

The Nazgûl at this point were dependent on their black horses (stolen from Rohan) for transportation. When they were swept away by the waters of the river Bruinen, their horses were killed. The Ringwraiths were forced to return to Mordor to regroup. They reappeared later mounted on flying creatures, at which point they were referred to as Winged Nazgûl.

By the conclusion of the War of the Ring, all of the Nine Nazgûl were destroyed. The Lord of the Nazgûl himself was slain by Éowyn, the niece of King Théoden (with help from Merry, known as "The Magnificent" thereafter) during the Battle of the Pelennor Fields. The remaining eight Ringwraiths attacked the Army of the West during the last battle at the Black Gate. However, when Frodo Baggins put on the ring in the fires of Mount Doom, Sauron ordered the eight remaining Nazgûl to fly with all possible speed to Mount Doom to intercept Frodo. They arrived too late, with the Ring falling into the fire along with the hapless Gollum. The Nazgûl were caught in the firestorm of the erupting mountain and were destroyed.

Only a few of the Nazgûl are named or identified individually in Tolkien's works. Their leader was the Witch-king of Angmar, and his second in command was named Khamûl. At least three of them were of Black Númenórean race. Khamûl was a lord of Easterlings, and was the only Nazgûl known by his name, although Gothmog, Lieutenant of Morgul, may have been a Nazgûl. Tolkien fans also speculate that either Herumor or Fuinur, or both, became Nazgûl. They were renegade Númenóreans who rose to great power among the Haradrim and it is highly likely that Sauron would have wanted them as Ringwraiths.

The Nazgûl existed mostly in the wraith world (the Unseen), making them extremely difficult to harm. Ordinary weapons would not hurt them, and even weapons of Númenórean manufacture would be destroyed if they passed through the wraith forms of the Nazgûl. They could not, however, interact normally with the material world (the Seen): they needed garments and weapons provided by Sauron to give them form. Consequently, they could be defeated by attacks that destroyed their disguises, forcing them to return to Sauron to receive new ones.

The Nazgûl spread terror in mortal creatures merely by their presence. Only specially trained horses or the fell beasts of Mordor could bear them. They caused panic and despair in their enemies simply by flying overhead, and only individuals of great courage could face them in combat.

They were also poisonous to mortal beings, causing a condition known as the Black Breath. Merely being in the vicinity of one of them could cause disorientation and illness. Intense exposure could be lethal.

The Nazgûl had poor vision in the material world, but they were acutely aware of the beings with a presence in the wraith world, like the wearer of the One Ring and certain elves. Anyone who could see into the wraith world could see the Nazgûl as they had appeared in their mortal lives.

The Witch King could also affect matter with his voice, shattering the dagger that Frodo had gotten in the Barrow Downs and weakening the gates of Minas Tirith. Whether other Nazgûl could perform similar feats is unknown.

The early Middle-earth Role Playing games name the eight, other than Khamûl, Er-Murazor (the Witch-king, of Númenórean race), Dwar, Ji Indur, Akhorahil, Hoarmurath (Númenórean), Adunaphel (female Númenórean), Ren and Uvatha, but none of these names are considered canon. It is particularly unlikely, in the context of the books, that any of the Nazgûl would have been female. Nor is it clear who were of Númenórean descent: only Khamûl's origin is given with certainty, and he was an Easterling. While the Witch-king is by many thought of as a Númenórean lord, this cannot be confirmed by any statement in Tolkien's writings.

Retrieved from "http://tolkiengateway.net/wiki/Nazg%C3%BBl"
Categories: Creatures | Nazgûl | Characters in The Lord of the Rings