Of Mîm the Dwarf is the seventh chapter of The Children of Húrin.

Once Beleg had departed the outlaw's camp, things went ill with the Gaurwaith, for the rains came out of season and the orcs raided ever further southward. Túrin made up his mind to make a stronghold where his men could weather storm and make store against hunger – so they journeyed further southward through the Vale of Sirion.

There they caught Mîm, one of the few Nibin-Nogrim (or Petty-dwarves), and he begged for mercy at Túrin's feet; but when the other outlaws would have killed him, Túrin released Mîm for a ransom. In payment for his life, Mîm granted them passage to his home where they might share his halls and so also grant the Gaurwaith their sanctuary. But with darkness creeping about, the outlaws were loathe to follow Mîm for fear of him escaping, so they put him in bonds to await the morning, and Mîm took this darkly. 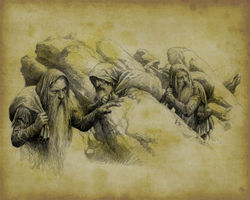 The Petty-dwarves by Alan Lee

The following morn, Mîm led the band onward, up the slopes of Amon Rûdh, the barren hill to the west of the Sirion, through a rocky landscape, until they reached a secret dell. There they found the door to Mîm's house, that now he named Bar-en-Danwedh, the "House of Ransom". The other Nibin-Nogrim were there also and sadly, Mîm's son, Khîm, lay dead from an arrow loosed by Andróg's bow the night before.

Mîm's anger was great and he cursed Andróg that if he might use his bow again so would he die from it – and Andróg was made to break his bow and swear never to hunt again, which he was wroth to do.

For a time the outlaws dwelt peacefully in Bar-en-Danwedh and learned its ways and entrance; and foods they shared with the Nibin-Nogrim; but the friendship was not warm, except perhaps that between Túrin and Mîm who would often talk alone. In this time Andróg searched out a hidden stair that passed to the heights of the hill but of his discovery he told no one.

With the coming of the deep snows of winter, Beleg came to Bar-en-Danwedh unlooked for; his heart had called him to his friend Túrin, and he brought the Helm of Hador and the Lembas bread that was the gift of Melian. So the Bow of Beleg and the Helm of Túrin were reunited.

Retrieved from "http://tolkiengateway.net/wiki/Of_M%C3%AEm_the_Dwarf"
Category: The Children of Húrin chapters