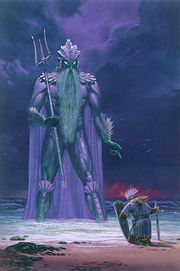 The Fall of Gondolin was one of the first fully fleshed out tales written by J.R.R. Tolkien. Dating back to 1916, the original tale was written in school excercise books. This version of the story would be included in The Book of Lost Tales Part One as well as the The Fall of Gondolin volume released in 2018. It is the most complete version of the story, though this version is incompatible with the later changes made to the Legendarium over the years, as is much of the Book of Lost Tales.

Tolkien would undergo various efforts to rewrite the story in later years, such as a poem known as *The Lay of the Fall of Gondolin*, which has never been fully released. His most famous effort to rewrite the story was released in *Unfinished Tales* as Of Tuor and his Coming to Gondolin, however the story breaks off upon Tuor's arrival to Gondolin and goes no further.