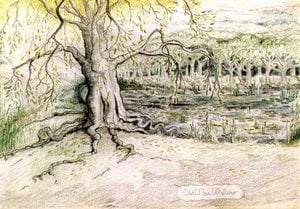 Old Man Willow is a character in The Lord of the Rings by J.R.R. Tolkien. He was a willow in the Old Forest from which much of the Forest's hatred of walking things came. He might have been an Ent who had become tree-like, or possibly a Huorn, as the Old Forest was originally part of the same primordial forest as Fangorn.

Tom Bombadil had power over Old Man Willow, and checked the evil as much as he could, or was willing.

Although he did not appear in the 2001 movie adaptation, a very similar episode with Hobbits being swallowed by a tree was included in the second film where Merry and Pippin are attacked by a Huorn in Fangorn Forest.

In The Fellowship of the Ring book, Old Man Willow cast a spell on the hobbits (Frodo, Sam, Merry and Pippin ), causing them to feel sleepy. Merry and Pippin go and lean against the trunk and fall asleep, while Frodo sits on a root to dangle his feet in the water, before he also falls asleep. The tree traps Merry and Pippin in cracks in the trunk, and tips Frodo into the stream. Sam manages to fight off the spell and rescues Frodo from the stream. Together they attempt to save Merry and Pippin by lighting a fire at the tree's base, but this only serves to infuriate Old Man Willow who threatens to kill the trapped hobbits. Thankfully they are saved by the timely arrival of Tom Bombadil.