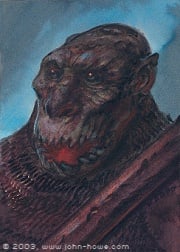 Olog-hai were shown as the shock troops in the motion picture Peter Jackson's The Return of the King, sporting armor and the famed war hammers alluded to in the appendices. These Olog-hai were not shown talking in any speech other than grunts. They differ from the other Trolls depicted in Peter Jackson's The Return of the King in that they have more forward-facing eyes as well as hair on their bodies, suggesting that they are a more advanced form of Troll. They are usually gray to black in color. They have twenty-four teeth. Their eyes are also bright orange, showing their evil connection with Sauron.