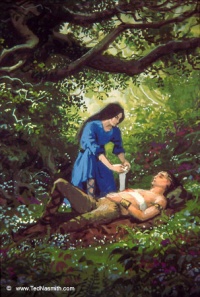 Meanwhile, Beren's wound brought him close to death, but Thorondor and his Eagles plucked Beren and Lúthien out of danger and away to safety. The lost Silmaril would eventually be recovered in the Hunting of the Wolf, but in tales Beren was known ever afterwards as Beren One-hand.