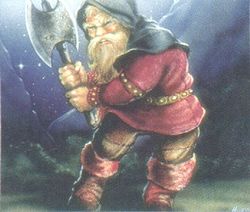 Ori was a Dwarf of the House of Durin, and brother to Nori and Dori. And a distant kinsman to Thorin Oakenshield. He wore a grey hood, played the flute, and well and quickly in large, bold hand and often used Elvish script.

In 2941, Ori (and his brothers) were selected to accompany their King Thorin Oakenshield on the Quest of Erebor, in which they were assisted by the Hobbit Bilbo Baggins. He later fought and survived the Battle of Five Armies, was given his share of the treasure by Dáin II Ironfoot. And settled in the mountain of Erebor.

forty eight years later Ori traveled with Balin, and Óin (also members of Thorin and Company) and a colony of Dwarves on a disasterous attempt to reclaim their ancient mansions of Khazad-dûm which were already occupied by the Goblins. At first they colony did well, but less than five years later Balin was killed, Orc reinforcements came south and took the East-gate, and Óin's group he took west to Hollin gate was destroyed except for a few.

Four years later Ori, wrote the last pages in the Book of Mazarbul before him, and the last few remaining Dwarves perished during a final stand inside the Chamber of Mazarbul.

During the War of the Ring, the Fellowship of the Ring journeyed through Moria and discovered the book that contained the records of the expedition written by Ori.

The Hobbit LotR The Fellowship of the Ring

Retrieved from "http://tolkiengateway.net/wiki/Ori"
Categories: Dwarves | Longbeards | Characters in The Hobbit