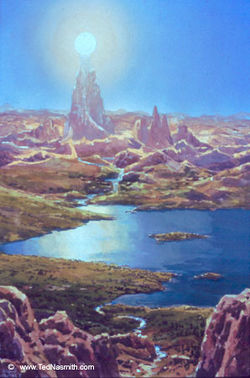 "The Lamp of the Valar" by Ted Nasmith

Ormal was one of the Two Lamps of the Valar, made by Aulë, filled by Varda and hallowed by Manwë in the south of the world while the Valar still dwelt on Almaren. It was destroyed by Melkor at least five ages before the beginning of the First Age. [1] The destruction created the Sea of Ringil, south of the Sea of Helcar.[2][note 1]

The name apparently means "Lofty gold"[3] or "High-gold".[4] Obviously it is composed of the Elvish roots OR and MAL.

Retrieved from "http://tolkiengateway.net/wiki/Ormal"
Category: Creations of the Valar