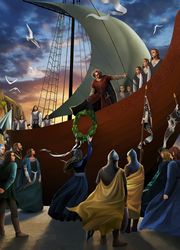 Palarran was a ship, the greatest of its time, built by Aldarion, who was then the Heir of King Tar-Meneldur of Númenor.

Aldarion was a great captain and adventurer, to the dismay of his father the King, who wished his son to spend his youth in the island he would one day rule. Aldarion, though, felt the call of the sea, and he, along with the Guild of Venturers of Númenor, built a vast ship, larger than any that had been seen at that time that they called Palarran.

When Palarran was finished, Tar-Meneldur felt unquiet and forbade the Queen and Aldarion's sisters from bringing to the ship a bough of oiolairë, the token of friendship with Ossë and Uinen. Erendis, instead of Aldarion's kin, brought a bough to the ship, which first caused the prince to love the maiden.

Aldarion sailed the Palarran upon the Great Sea to Middle-earth several times.[1]