Rohan was a Mannish kingdom on the northern borders of Gondor. It was the territory of the Rohirrim, a people of herdsmen and farmers. Well-known for their horses and cavalry, they were Gondor's most important ally.

In the 1200s of the Third Age, the Kings of Gondor made close alliances with the Northmen of Rhovanion, a people akin to the Three Houses of the Edain (later the Dúnedain) from the First Age. In the 2000s, a remnant tribe of such Northmen that called itself the Éothéod moved from the valleys of Anduin to the north west of Mirkwood, clearing out what remained of the recently defeated witch kingdom of Angmar, east of the Misty Mountains.

In the meantime, the Gondorian province of Calenardhon was deserted by the Great Plague and during the Watchful Peace and local chieftains, such as Dunlendings gained control.[1] During the time of Cirion the Steward of Gondor, Calenardhon was overrun by the Balchoth.

Ted Nasmith - The Oathtaking of Cirion and Eorl

In 2509, Cirion sent summons to the Éothéod for aid in stopping a combined invasion of Men from the north east of Middle-earth, and Orcs from the Misty Mountains. Borondir reached Eorl the Young, king of the Éothéod, who answered the summons, and arrived unexpectedly at a decisive battle of the Field of Celebrant.

As a reward, Cirion invited Eorl on Amon Anwar, over the tomb of Elendil and he swore mutual alliance and cooperation between the two peoples. The Steward also gave Eorl the deserted but fertile area of Calenardhon to take as their own and repopulate.

Eorl moved his people there driving out the Dunlendings who attempted to repopulate it without Gondor's consent. Eorl also built the first city of Rohan, Aldburg. Eorl lost his life fighting the Easterlings in the Wold.[2] Migration was continued to the days of second king Brego who defended the borders against the Dunlendings and Easterlings, and drove the remaining Orcs and Balchoth off the Wold. Brego also built the Golden Hall of Meduseld, and made Edoras the capital of Rohan. 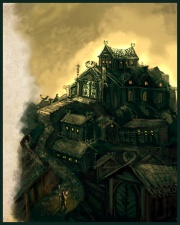 King Aldor was the founder of a golden age in Rohan's history, during which he completed Rohan's conquest east of the Isen and the Rohirrim increased greatly in numbers, who even settled valleys of Ered Nimrais including Harrowdale. It was he who succeeded in driving all the remaining Dunlendings from his realm. Rohan continued to prosper during Goldwine's rule; but as the guard of the borders lessened, the Dunlendings slowly began to return to northern Westfold, settling the area around the (friendly to them) Ring of Isengard and the southern eaves of Fangorn Forest[3]. A powerful Dunlendish force had been established, and King Déor was forced to ride northward from Edoras, ultimately to defeat his enemies but he was unable to recapture the Ring of Isengard. The following years the Dunlendings harassed and mingled with the Rohirrim.

The first line of kings lasted for 249 years, until the ninth king Helm Hammerhand. In T.A. 2758, Rohan was invaded by Dunlendings under Wulf, son of Freca, of mixed Dunland and Rohan blood. The King, Helm Hammerhand, took refuge in the Hornburg until reinforcements from Gondor and Dunharrow (a refuge of the Rohirrim) arrived a year later and defeated the invaders. In a daring raid Fréaláf recaptured Edoras, and managed to reclaim it. He eventually drove the Dunlendings back across the rivers Isen and Adorn, freeing all of Rohan.

The Rohirrim now kept a strong force in north Westfold, however at some time King Folcwine would need the help of Gondor to drive some of them from the area.[4] He was successful but the people who remained were largely of mixed blood, and not loyal to Edoras.[5]

It was soon after this that Saruman arrived and took over Isengard, and was welcomed as a strong ally, since it would take Rohan close to 200 years to recover its strength after the invasion.

As Rohan was still recovering from the war with the Dunlendings, hostilities remained at the western borders. For two generations, during the coincidental conflict many thousands of Orcs tried to claim a refuge in the White Mountains and troubled the Rohirrim; Brytta fought them off, and when he died it was believed Rohan was free of Orcs; they were not entirely driven from the White Mountains until T.A. 2864 by Folca.

During Thengel's reign, a mysterious Northerner calling himself Thorongil entered his service, and rode with him for some time.

Around 2960 Saruman started to harass Rohan and in 3014, he began using his influence to weaken the King, Théoden, as part of a campaign to invade or take over the kingdom. In 3019, he launched a full-scale invasion of Rohan, with victories; (Théoden's son, Théodred was killed during the First Battle of the Fords of Isen) and defeat at the Battle of the Hornburg, where the Huorns came to the aid of the Rohirrim.

On the heels of this victory, Théoden rode with an army to Minas Tirith and helped break its siege in the Battle of the Pelennor Fields, where he was slain. Éomer, the nephew of King Théoden, then succeeded to the throne, beginning the third line. Éomer rode with the armies of Gondor to the gates of Mordor and took part in the final battle with the forces of Sauron, who was defeated when the Ruling Ring was destroyed.

The rule of the Stewards of Gondor was now over. King Éomer and the new king of Gondor, Aragorn II (Aragorn), renewed their oath of alliance, and reaffirmed Cirion's grant of Calenardhon to the Rohirrim. But though Sauron had perished Éomer often fulfilled the Oath of Eorl and went with King Elessar far into the East and South. He was known as Éomer Éadig, or "the Blessed", because during his reign Rohan recovered from the hurts of the War and became a rich and fruitful land again.

After the downfall of Sauron, Gimli led a party of the Dwarves of Erebor to Aglarond, the Glittering Caves of the White Mountains within the realm of Rohan, of which there was an entrance in Helm's Deep.[6]

The borders of Rohan were the river Isen in the west, bordering Saruman's Isengard; the river Adorn, a tributary of Isen, also in the west, forming the border with the unfriendly Dunlendings); the White Mountains in the south; the Mering Stream in the southeast, at the border between Rohan and Gondor; the Mouths of Entwash in the east; and the Limlight, a tributary of the Anduin as the northern border.

The most significant feature of Rohan's geography was the river Entwash, which divided the country between Eastemnet and Westemnet, itself divided as Eastfold and Westfold. Other lands were the Wold, the Folde, the Downs and the Undeeps.

Ted Nasmith - The Riders of Rohan

The Rohirrim found abandoned Gondorian fortresses and refuges in the White Mountains, such as the Dunharrow, the Orthanc and the Hornburg which they restored and used themselves.

The capital of Rohan was the hill fort of Edoras which lay on the slopes of the White Mountains. Another large city was Aldburg, the capital city of the Eastfold and original city of Eorl the Young. Other cities must have existed but are not named.

At the time of the War of the Ring, Rohan was roughly a third the size of Gondor, whose borders had slowly been shrinking for decades.[source?]

The countryside of Rohan was described as a land of pastures and lush tall grassland. The lands of Rohan are frequently described as appearing like "seas of grass". Most of the Rohirrim dwelt in small villages or farms.

The military of the Rohirrim was commanded by Marshals. The First Marshal of the Riddermark was the highest military rank and commanded the Muster of Edoras: Riders of the capital Edoras and the surrounding lands, including the King's Lands and Harrowdale. In his youth, King Théoden had led the Riders of the Muster of Edoras himself, so that no First Marshal was needed and at the time of the War of the Ring, there was no First Marshal.

After the War of the Rings, the new rank of Marshal of the East-mark was created for the eastern Rohan by King Éomer. The first Rider to hold it was his lieutenant, Elfhelm.

The alliance between Rohan and Gondor came into existence in the year 2510 of the Third Age. In that year the Easterlings launched a massive invasion of Gondor. The army of Gondor was defeated and trapped between the Limlight and the Celebrant. Gondor, which had always been on friendly terms with the different tribes of the Northmen, sent messengers to the closest tribe, the Éothéod. Although it was unlikely that the message calling for aid would come through, it did. Then Eorl the Young and his fierce Éothéod Riders unexpectedly took the field during the Battle of Celebrant and turned the tide in the favour of Gondor. As a reward Cirion, the Steward of Gondor, gave Eorl the depopulated province of Calenardhon for his people to settle, while fulfilling Gondor's need for a strong ally. The Oath of Eorl was sworn by both Cirion and Eorl. Neither nation has ever broken the alliance ever since. Rohan has gone through great lengths to fulfill their part of the treaty including sacrificing two of its heirs when Gondor was under threat from the Haradrim in 2885, when Fastred and Folcred, the twin sons of King Folcwine, were killed during the Battle of Crossings of Poros. King Théoden once again honoured the alliance in the Battle of the Pelennor Fields.

War with the Dunlendings

To the west of Rohan lived the Dunlendings, a native people who had been hostile against the Free Peoples for a long time. The Dunlending Wulf briefly usurped of the throne of Rohan during the long winter.

During the War of the Ring, Saruman would incite them against the Rohirrim and they would fight alongside the Uruk-hai in the Battle of the Hornburg.

When king Théoden began to grow old, he took as an adviser Gríma, later called Wormtongue. Gríma quickly became Théoden's chief adviser, but unknown to all he was secretly working for Saruman. Gríma played on Théoden's fears to further weaken the strength of the king and all of Rohan, always advising retreat where an attack was needed. He may have also begun poisoning the king at this time. This nearly proved disastrous for Rohan, and also for Gondor, by robbing them of their strongest ally in the north. Gríma Wormtongue's plans were not revealed until Gandalf arrived in Edoras during the War of the Ring.

The name Rohan (coined by Hallas) is Gondor Sindarin, meaning "Horse-country". Rohan is a debased form of the proper Sindarin name Rochand (or Rochan), containing the elements roch ("horse") and the toponymical ending -and.[7][8][9]

The native name of the country was Riddermark, or simply the Mark.

In a draft of The Appendices, Tolkien noted that Rohan "is of Noldorin origin, a translation of the native Lōgrad", having the "strictly correct form [...] Rochann."[10]

Conceptualised as the "Horse kings of Rohan" allied with Mordor in early drafts of 1939, the Rohirrim took their final form in 1942 when the text of the Lord of the Rings was completed to about one third.

Several aspects of Rohan's culture and history seem to be inspired by both Goths, Scandinavians and the medieval Anglo-Saxons.

Just like the Germanic Ostrogoths, Rohirric culture was a mounted culture. It had separated from the Northmen, moved south, and had settled in close proximity with a civilization. In the Goths' case it was the Byzantine Empire and in the case of the Rohirrim, it was Gondor.

Especially Hervarar saga, with its Mirkwood, Gothic horsemen and shieldmaidens, appears to have inspired Tolkien when creating the Rohirrim, although he exchanged the Gothic tongue with the Anglo-Saxon.

The antipathy between the Rohirrim and the Dunlendings resembles the historical tension between the Anglo-Saxon settlers of Britain and the native Celts.