Sauron was the Lieutenant of Morgoth, who after his fall became his own Dark Lord, his most famous role and the time of his passing recounted in Lord of the Rings.

In the earliest of days, before the Valar entered Arda, Sauron was in origin an "angelic" spirit called a Maia in Tolkien's invented mythology. He was at first the chief servant of Aulë, the Smith, one of the Valar, or ruling powers of the world. However, Sauron was soon perverted by the Dark Lord Melkor (later known as Morgoth, an evil Vala), and Sauron himself turned to evil. Ever after, Sauron served Morgoth faithfully, and even in later days, after Morgoth was defeated and locked outside the confines of the world, Sauron encouraged and coerced Men to worship Morgoth as God. However, while Morgoth wanted to either control or destroy the very matter of Arda itself, Sauron's desire was to dominate the minds and wills of its creatures. It was in this that Sauron was wiser than Morgoth.

During the First Age, the Noldorin Elves left the Blessed Realm of Valinor in the Utter West (against the counsel of the Valar) in order to wage war on Morgoth, who had stolen the precious Silmarils. In that war, Sauron served as Morgoth's chief lieutenant, surpassing all others in rank. Known as Gorthaur the Cruel, Sauron at that time was a master of illusions and changes of form, and Werewolves were his servants, chief among them Draugluin, Sire of Werewolves, and Thuringwethil, his vampire herald. When Morgoth left Angband to corrupt the newly awakened Men, Sauron directed the War against the Elves. He conquered the Elvish isle of Tol Sirion, so that it became known as Tol-in-Gaurhoth, the Isle of Werewolves.

Ten years later, Finrod Felagund, the king of Nargothrond and former lord of Tol Sirion, died protecting Beren in captivity there; soon afterwards, Lúthien and Huan the Wolfhound defeated Sauron in that place and rescued Beren from the dungeons. After his resounding defeat by Lúthien, Sauron played little part in the events of the First Age (possibly hiding from Morgoth), and after his master was defeated and cast out by the Valar, Sauron repented (apparently) and pled for mercy. But he was unwilling to return to the Utter West for judgement, and so he fled and hid.

File:Annatar.jpg
Annatar as envisioned by Weta from Peter Jackson's The Lord of the Rings

After lying hidden and dormant for about one thousand years, Sauron put on a fair visage in the Second Age. Calling himself Annatar, the Lord of Gifts, he befriended the Elvish smiths of Eregion, and counseled them in arts and magic. Not all the Elves trusted him, particularly Lady Galadriel and Gil-galad, High King of the Ñoldor, but a few listened to them. The Elves forged Rings of Power, but in secret Sauron forged the One Ring in Mount Doom to rule the other rings, investing most of his own power into the Ring as he forged it.

In this time Sauron became known as the Dark Lord of Mordor. He raised Barad-dûr, the Dark Tower, near Mount Doom; constructed the Black Gate of Mordor to prevent invasion; corrupted nine mortal Men with Rings of Power and turned them into the Nazgûl (Ringwraiths), his chief servants; and raised massive armies of Orcs, Trolls, and Men, chiefly Easterlings and Southrons. Because of this, towards the end of the Second Age, Sauron assumed the titles of Lord of the Earth and King of Men. 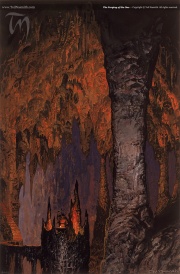 The Forging of the One, by Ted Nasmith

This offended the Númenóreans, the powerful Men descended from the line of Beren and Lúthien, who lived on the island of Númenor in the sea between Middle-earth and Valinor. The proud Númenóreans came to Middle-earth with great force of arms, and Sauron's forces fled. Realizing he could not defeat the Numenoreans with military strength, Sauron allowed himself to be taken as a hostage to Númenor by King Ar-Pharazôn. There, he quickly grew from captive to advisor; he converted many Númenóreans to the worship of Morgoth, and raised a great temple in which he performed human sacrifices. Finally, he convinced the king to rebel against the Valar and attack Valinor itself. Eru, the supreme god, then directly intervened: Númenor was drowned under the sea, and the great navy of Númenor was destroyed. Sauron was diminished in the flood of Númenor, and fled back to Mordor, where he slowly rebuilt his strength during the time known as the Dark Years.

From this point on he was unable to assume a fair shape, and ruled now through terror and force. A few faithful Númenóreans were saved from the flood, and they founded Gondor and Arnor in Middle-earth. These faithful Men, led by Elendil and his sons, allied with the Elven-king, Gil-galad, and together fought Sauron and, after a long war, defeated him, although both Elendil and Gil-galad were killed. Isildur, son of Elendil, cut the One Ring from Sauron's finger and claimed it. Later, the Ring betrayed him and was lost for more than two thousand years.

In the Third Age, Sauron rose yet again, at first in a stronghold called Dol Guldur, the Hill of Sorcery, in southern Mirkwood. There he was known as the Necromancer, and the Elves did not recognize him at first. Gandalf the Wizard stole into Dol Guldur and discovered the truth; eventually the White Council of Wizards and Elves put forth their might and drove Sauron out. But the White Council was led by Saruman, who wanted the Ring for himself, and Sauron simply moved back to Mordor and raised Barad-dûr again. He fortified Mordor and prepared for war against Gondor and the Elves, with Saruman now his servant.

Sauron bred immense armies of Orcs and allies with which enslaved Men from the east and south. He adopted the symbol of a lidless eye, and he was able at that time to send out his will over Middle-earth, so that the Eye of Sauron was a symbol of power and fear.

After torturing Gollum, a former Ringbearer, he learned that the One Ring had been found by Bilbo Baggins The Hobbit. He sent his agents to the Shire, Bilbo's home, only to find that both Bilbo and his nephew, Frodo, had gone. Unbeknownst to Sauron, Frodo had, at the behest of Gandalf, joined the Fellowship of the Ring on a quest to destroy the Ring forever by casting it into the fires of Mount Doom, in the heart of Mordor. He rallied his vast armies to conquer the resistance's strongholds, and sent the Ringwraiths to find and kill Frodo. At about this time, he also learned that Aragorn, Isildur's heir, had also joined the Fellowship, and was rallying armies to defeat his. 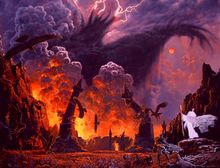 The Shadow of Sauron, by Ted Nasmith

When Saruman's army is defeated at Isengard, Aragorn uses the Palantir of Orthanc to reveal himself to Sauron. Sauron jumps to the conclusion that Aragorn has the ring and sends an army commanded by his strongest servant, The Witch-King of Angmar, to overthrow Minas Tirith in what would become known as the Battle of the Pelennor Fields.

Although Sauron loses the Battle of Pelennor Fields, the free forces of the west are greatly weakened, and Sauron still has sufficent armies in reserve to ensure military victory. He is outwitted, however, by the strategy of Gandalf, who urges the captains of the free peoples to march against Sauron, thus diverting the Dark Lord's eye from the real threat of Frodo, the Ring Bearer, who is nearing the end of his quest to destroy the One Ring.

Frodo, however, fails at the last moment, unable to resist the power of the Ring at the place of its birth. But Gollum inadvertently saves him by recovering the Ring in a desperate attempt to possess it and then falling with it into the fire. Thus Sauron's power is unmade, and his corporeal power in Middle-earth comes to an end. His spirit towers above Mordor like a black cloud, but is blown away by a powerful wind from the West, and Sauron is now permanently crippled, never to rise again. (Saruman soon suffers a lesser version of this fate.)

Sauron (originally Thauron) is Quenya, and can be translated as the Abhorred or the Abomination; in Sindarin he is called Gorthaur the Necromancer, the Abhorred Dread. He is also called the Nameless Enemy, which is hardly accurate (but perhaps an effort to lessen his psychological impact), whereas Morgoth is the Dark Enemy. The Dúnedain call him Sauron the Deceiver due to his role in the downfall of Númenor and the Forging of the Rings of Power. His two most common titles, the Dark Lord of Mordor and the Lord of the Rings, appear only a few times in the books. His other titles were similar to Morgoth's.

Prior to the publication of The Silmarillion Sauron's origins and true identity were unclear to those without full access to Tolkien's notes. In early editions of the Guide to Middle Earth, Sauron is described as "probably of the Eldar elves."

Since the earliest versions of the Silmarillion legendarium as detailed in the History of Middle-earth series, Sauron has undergone many changes. The prototype of this character was Tevildo, lord of the cats, who played the role later taken by Sauron in the earliest version of the story of Beren and Lúthien in The Book of Lost Tales, the Tale of Tinúviel. Tevildo later (but still in the Book of Lost Tales period) was transformed into Thû, the Necromancer. The name was then changed to Gorthû, Sûr, and finally to Sauron. Gorthû, in the form Gorthaur remained in The Silmarillion.